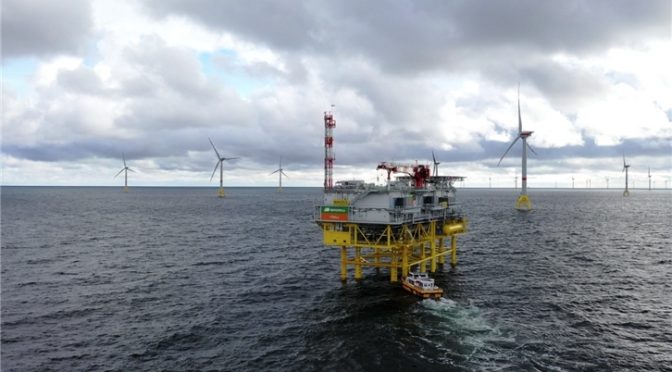 It awards the Eiffage Métal the engineering and construction of the substation, which will house the transformers and the rest of the electrical equipment of the wind farm, which Engie Solutions will carry out on its assembly and march.
15 Spanish companies working in these moments in the Ría de Ferrol and Avilés in the construction of the wind turbines, awarded to the UTE Navantia-Windar for 350 million euros. Asimismo, in the port of Brest, the contract has been used and the casi a decade of Spanish companies.

Iberdrola advances in Saint-Brieuc, the first marine wind power project that rises in French waters of the Channel of La Mancha – with an investment of 2,400 million euros and an installed power of 496 MW-, with the award of the substation to the joint venture integrated by Eiffage Métal y Engie Solutions. In this way, it practically completes the contracts for this renovable complex.

The first of them will carry out the engineering and construction, both of cementation and of the cubicle, which will house the transformers and the rest of electrical equipment. For the most part, Engie Solutions will carry out the final assembly and its launch.

The substation is the central nucleus of the marine wind farm, responsible for collecting and preparing, for its transmission to the earth, the electrical energy produced by the 62 wind turbines that will integrate the installation, estimated at 1,820 GWh / year; a volume that will meet the energy needs of a population equivalent to 835,000 people and avoid emission to the atmosphere of 100,000 tons of CO2 per year.

The construction of the substation will be completed at the beginning of 2022 and will unfold in the buildings that the Eiffage constructor operates in Belgium and Poland. Installation will take place at the Engie Solutions in Belgium.

Saint-Brieuc – as it happened with Wikinger marine wind energy projects and most recently East Anglia One – has become a new example of a green economy based on investments in renewables that boost industrialization in sectors of the future in Europe and act as tractor of sustainable and quality work in Spanish and European companies.

The past month of June, the Navantia-Windar TPP was awarded the construction of 62 jackets, platforms, with their respective pilots, which include the wind turbines to the sea.

The contract, with an amount of 350 million euros, is the largest order obtained in its history by the joint company Navantia-Windar in the marina wind sector and will generate a work load for 1,000 1,000, both in Asturias – where pilots are made, as in Galicia, from where the jackets and the assembly of all components are made.

From now on, 15 local companies will work on the Ría de Ferrol (Galicia) and Avilés (Asturias) in their manufacture, and it is estimated that the number will double in the coming months. Likewise, in the facilities of the port of Brest, the contract has been used for a decade by Spanish companies.

Saint-Brieuc, on the final straight

Since March of 2020, Iberdrola has closed the practical totality of supply contracts of Saint-Brieuc, the lack of adjudicating the electrical equipment of the substation. The aerogenerators are being manufactured by Siemens Gamesa, Prysmian will be responsible for the submarine cable, Van Oord will carry out the cement transport – scheduled for the spring of 2021 – and Saipem will install the substation in the plant. The puesta en march del wind farm is predicted, foreseen, for 2023.

This new installation is located in the Iberdrola market for the French market, which the company plans to invest up to 4,000 million euros in the next four years.

Iberdrola trusts that the electrification will act as a foreign exchange rate in the postCOVID world and, for that reason, has accelerated investments to contribute to the reactivation of economic activity and the implementation. This support for green recovery has led to committing investments this year of 10,000 million euros in renewable energies, smart electrical networks and large scale storage systems, after having allocated 100,000 million since 2001 in the world.