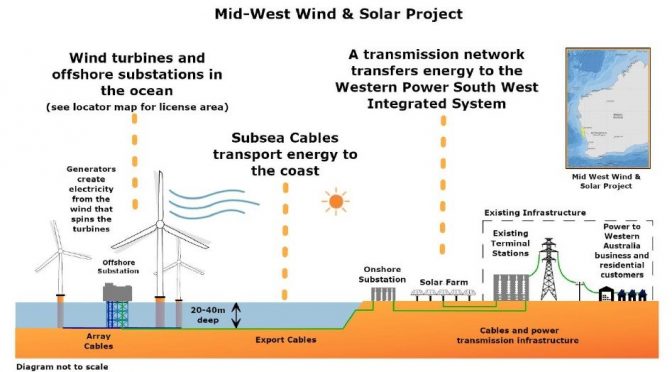 The website reneweconomy.com.au reports that the oil and gas explorer Pilot Energy will begin a feasibility study on a huge 1,100 MW offshore wind farm, which will be located off the coast of Western Australia and will be part of a major energy hub wind power and solar energy, as the company seeks to diversify its business from the fossil fuel sector.

The ASX-listed company announced Friday that it would begin an early evaluation of the proposed Midwest Wind and Solar Project, which could see some of the world’s largest offshore wind turbines deployed in waters previously destined for oil and gas exploration.

The company has a majority stake in an oil and gas exploration permit that covers an area of ??more than 8,600 square kilometers of Western Australian coastal waters, and the company believes the region could also serve as an ideal site for a wind farm. Marine.

The project could also be based on a 160 hectare onshore site, as part of Pilot Energy’s existing on-site operations for the installation of a solar power plant. Only one other major offshore wind project has been proposed for Australia, the 2,000 MW Star of the South proposal at Victoria’s Gippsland, although it is still awaiting federal environmental approvals.

Pilot Energy President Brad Lingo told RenewEconomy that the Mid West project could leverage high-quality wind and solar resources, as well as leverage work the company had previously done to obtain oil and gas exploration rights in the place.

“This is exactly the type of development that demonstrates the ability to substantially redefine how the Australian offshore oil and gas industry can, in parallel with existing operations, participate in a low-carbon future through energy projects. offshore renewables that deliver substantially low-cost power to Western Australia, ”said Lingo.

“The substantial nature of the offshore opportunity in Western Australian also presents the option to supply renewable hydrogen for domestic residential and industrial consumption as well as the potential to supply international markets.”

Lingo added that the proposed project would be located close to the existing Three Springs substation, and would face no limitations on generation or network capacity, although RenewEconomy suspect that some upgrades might be needed for a project of that size.

The company said that the planned project would help to diversify the oil and gas explorer’s business in recognition of the growing green opportunities in Western Australia.

The company pointed to an assessment undertaken by Geoscience Australia, which identified the mid-West region of Western Australia has one of the highest potential locations for investment in hydrogen production and export facilities, due to high quality wind and solar resources and access to export markets.

The company says that the wind and solar project could supply power to the Western Australian electricity system, and could potentially be used as a source of renewable electricity for use in the production of green hydrogen. The feasibility study will include an assessment of the viability of supplying hydrogen for domestic use, or for export.

“This is only the beginning of the process to establish the overall feasibility of the project but it is a very good first step and Pilot’s existing footprint and management experience provides a unique opportunity to participate in the energy transition as a dedicated energy solutions provider,” Lingo added.

“Pilot strongly believes that focussing on the energy transition provides the opportunity to deliver strong growth and significant shareholder value.”

The Swedish HYBRIT project recently completed construction of a pilot facility that will use green hydrogen to produce fossil-free steel, with an aim of brining green steel to market by 2026. The Grattan Institute has argued that the production of green steel in Australia could be the most effective way to utilise green hydrogen, avoiding the need for costly export of hydrogen and revitalising an Australian manufacturing sector.

Pilot Energy’s feasibility study will consider the deployment of up to 78 offshore wind turbines and could utilise some of the world’s largest wind turbines currently available, with a generation capacity of 14MW.

Lingo said that the deployment of offshore wind turbines enabled the use of larger turbines, as well as providing access to more consistent wind resources, with the project having the potential to achieve capacity factors in excess of 60 per cent, around double what can be achieved by onshore wind farms.

The project could see up to 1,100MW of offshore wind generation capacity build off the Western Australian coast across four stages. It would also involve the deployment some of the world’s largest wind turbines, significantly surpassing the size of any turbines used at onshore wind farms in Australia.

The company said that it expects to spend around $1.2 million on the completion of the feasibility study, and will assess the next steps for the project when the outcomes are known, including identifying suitable co-investors in the development.