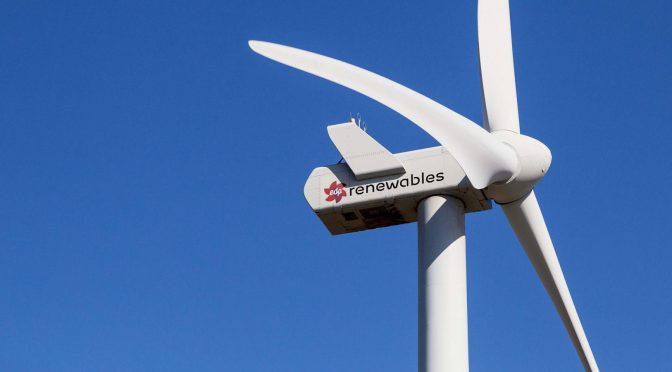 EDP Renewables (Euronext: EDPR), a global leader in the renewable energy sector and one of the world’s largest wind energy producers, has today announced that, as of June 30, the company managed a portfolio of operating assets of 11.4 GW, with average age of 9 years, spread over 11 countries, of which 10.9 GW are fully consolidated and 550 MW equity consolidated (Spain and US). In the last twelve months, the company built a total of 986 MW, including the 50% participation in a 278 MW US solar portfolio. During such period, EDPR successfully completed Sell-downs totalling 1.3 GW and decommissioned 18 MW in Spain for repowering. All in all, as of June 2020 EDPR’s YoY consolidated portfolio net variation was negative by 326 MW.

In the period, pursuing its Sell-down strategy, EDPR successfully concluded the divestment of its entire ownership in the 137 MW Babilonia wind farm in Brazil, as announced in July 2019. As of June 2020, EDPR had 2.3 GW of new capacity under construction, of which 1,800 MW related to wind onshore, 200 MW to solar PV and 330 MW to equity participations in offshore projects

Rui Teixeira, interim CEO of EDP Renováveis stated: “These results reflect solid foundations, and the implementation of the strategic plan is running ahead of Schedule in terms of both our global capacity targets and divestments. Today we are a strong company, one that can cope with the challenges that the market puts in front of us”.

Regarding the financial results, revenues decreased to €913m (-9% YoY), where impact from capacity MW (-€79m YoY; including Sell-down transactions) and wind resource (-€52m YoY) were not offset by higher average selling prices (+€22m YoY) along with positive impact from forex conversion and others (+€16m YoY).

Other operating income amounted to €194m (-€59m vs 1H19) with YoY evolution reflecting the gains (+€219m) related to the Sell-down of a 997 MW portfolio (491 MW net for EDPR) in the 1H19 along with €145m of capital gains accounted in the 1H20 related to offshore transactions, namely the stakes already sold to the offshore JV with Engie (still pending sale to Windplus (PT) and Mayflower (US) pursuant to the agreement signed in Jan-20).

As of June 2020, Net Debt totalled €3.027m (+€224m vs Dec-19) reflecting, on the one hand, cash generated from assets, and on the other, investments in the period and forex conversion. Institutional Partnership Liabilities totalled €1.376m (+€89m vs Dec-19), with benefits captured by the projects and tax equity partners along with a new institutional tax equity financing in the period.

To date, the Company has continued to implement its Business Plan: since the close of the period in question, EDPR has finalised the divestment of two asset portfolios for close to €1 billion. The first, announced in July, is the onshore wind farms in Spain, with a generation capacity of 242MW. The second, revealed in September, consists of an 80% share in wind and solar power assets located in the US, with a generation capacity of 563 MW. With these agreements, EDPR has completed the divestment of over 55 % of the €4 billion planned over the 2019-2022 period.

Furthermore, the company has continued to make progress with the conclusion of agreements for energy selling; after the PPA and CfD deal announced in the second quarter of 2020 (the latter being a solar energy project in the US with a generation capacity of 100MW), EDPR has contracted 83% of the almost 7.0 GW target of wind and power capacity build-out around the world for the period 2019-2022.