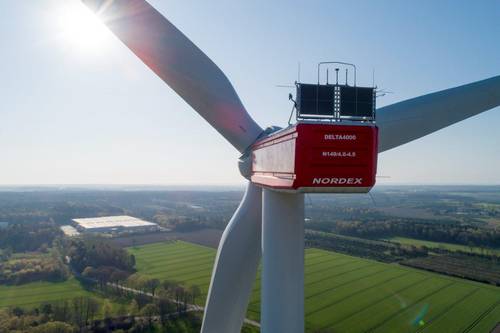 On 28 August 2020, the Nordex Group installed the first of 114 wind turbines for the Nysäter wind farm in Sweden after completion of the necessary infrastructure work. At the end of 2018, the Group received a contract for the turnkey construction of 104 N149/4.0-4.5 wind turbines and 10 N131/3900 turbines from RWE Renewables, consisting of two separate sites “Hästkullen” and “Björnlandhöjden” and including civil and electrical infrastructure works. Nysäter is currently the largest project of the Nordex Group in Europe.

The Nysäter wind power project is being constructed across a large area of mainly forested land in county Västernorrland, central Sweden. The sites are characterized by average wind speeds of between 7.5 and 8.0 meters per second. Since the wind conditions and the complex topography within the site are very different, the N149/4.0-4.5 turbines have been configured using various tower heights and operational modes, in order to optimise the project economics and operational lifetime. The first turbine to be erected at the “Hästkullen” site is the N149 wind turbine from the Delta4000 platform, which is installed on a 145 metre tubular steel tower.

“The installation of the first turbine at Hästkullen marks an important milestone for the Nysäter project and is the result of many months of hard work and strong cooperation amongst a wide range of stakeholders. We would like to thank all parties involved in bringing the project this far and we are looking forward to a continued safe and successful execution of this remarkable project”, says Tim Carpenter, Vice President region Nordic of the Nordex Group.

The Group has installed more than 29 GW of wind energy capacity in over 40 markets and in 2019 generated revenues of EUR 3.3 billion. The company currently employs a workforce of approx. 7,900. The joint manufacturing capacity includes factories in Germany, Spain, Brazil, the United States, India, Argentina and Mexico. The product portfolio is focused on onshore turbines in the 2.4 to 5.X MW class, which are tailor-made for the market requirements of countries with limited space and regions with limited grid capacity.