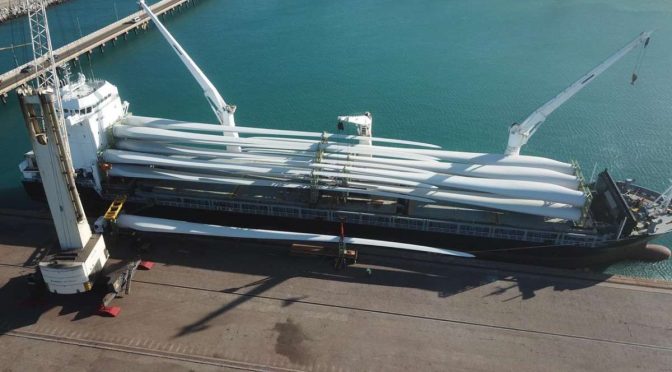 The 72.4 meter long giants were produced by Aeris, in the industrial area of ??the Pecém Complex, and are on their way to the United States.

The first wind blades produced at Complexo do Pecém by Aeris are already on their way to the United States, at the request of Germany’s Nordex. Eighteen blades completed the shipment last weekend, after a few days of intense operation in the storage yard and in the Multiple Use Terminal (TMUT) of the Port of Pecém.

Each of these giants is 72.4 meters long and weighs 22.9 tons, dimensions that impressed the workers of the port of Pecém. Currently, an area in the courtyard of the port of Ceará is exclusively used for the storage of wind blades produced in Complexo do Pecém.

“We seek to consolidate the Pecém Complex as a benchmark for the entire renewable energy segment, so it is gratifying to have a large manufacturer like Aeris in our industrial area producing for major players on the international scene such as Nordex, which is starting this project with us. and at the same time challenging ”, says Duna Uribe, Commercial Executive Director of Complexo do Pecém.

For Carlos Alberto Nunes, commercial manager of Tecer Terminais – provider of operational services in Porto do Pecém, this operation reflects the importance of alliances between large wind energy companies in the sector. “If there was no openness between the companies involved, the process would be different, slower. Being able to integrate the services of the port companies was essential for this shipment of notorious physical proportions to take place. Adaptability is synonymous with this operation, ”he says.