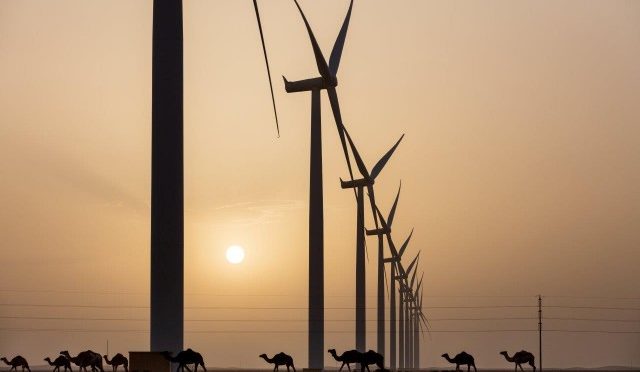 The Spanish company currently has over 72% of the wind energy market share in Morocco.

Spanish wind power operator Siemens Gamesa is hoping to reach an energy production capacity of one gigawatt (GW) in Morocco in the near future, Sonia Adnane, Siemens Gamesa’s head of communications and public affairs in Africa, told Morocco World News.

“Today, we have 180 megawatts under construction in Midelt, as … part of the 850MW framework agreement in partnership with the National Electricity Office (ONEE). In that context, we are very much looking forward to starting the next ones, helping us to reach more than 1GW in the country,” Adnane said.

Siemens Gamesa, present in Morocco since 2017, currently operates eight wind farms across Morocco, totaling 856 MW and representing over 72% of the local market share.

In an interview with MWN, Adnane, who is also responsible for Siemens Gamesa’s corporate social responsibility in Africa, shared the company’s expansion ambitions in Morocco. She also touched on initiatives launched during the COVID-19 pandemic.

The Spanish company expanded to Morocco in 2017 through the launch of a wind turbine blade factory in Tangier. The plant is the first of its kind in Africa and in the Middle East, Adnane revealed.

According to the executive, the production unit delivers blades to Morocco, Europe, Africa, and the Middle East.

Siemens Gamesa currently employs approximately 800 people in Morocco, including 750 in the Tangier factory and around 50 in its Casablanca-based commercial office.

The company is one of the main partners of Moroccan organizations operating in the field of renewable energies.

“We are proud to be a partner of choice and can look up at some major achievements and projects in collaboration with our partners in the Moroccan wind energy market,” Adnane said.

“We aim to keep and strengthen these partnerships while continuing to develop technologies that will maximize the productivity of the wind source,” she continued.

The renewable energy expert expressed Siemens Gamesa’s wish to further expand in Morocco because the country offers “the best wind conditions” in the region.

“Whenever and wherever we will see opportunities, we are committed to accompany the country to reach its goals for a sustainable future in Morocco and for Morocco,” Adnane pledged.

Like the majority of businesses across the world, Siemens Gamesa has sustained an impact from the COVID-19 pandemic. According to Adnane, the company recorded an 8.4% reduction in year-on-year revenues during the third quarter of 2020.

However, the organization’s “strong financial position,” in addition to its “strict health and safety protocols,” allowed it to mitigate some of the COVID-19 crisis’ repercussions.

“In Africa and certainly in Morocco, we were able to keep our activities quite well on track,” she added, thanking the Moroccan government for its mobilization to support businesses.

Siemens Gamesa has also launched a series of initiatives for the benefit of Moroccans in remote areas.

“Morocco represents more than 80% of Siemens Gamesa’s workforce based in Africa. Considering its strong presence, Siemens Gamesa has devoted a significant part of [its social commitments] funds to social action in the country,” Adnane said.

The initiatives targeted villages in rural areas, especially in the regions where Siemens Gamesa operates wind farms. They benefited more than 5,000 Moroccans, mainly through the distribution of food, clothing, and essential hygiene products.

The company also distributed fruit trees for planting, with the aim of providing income for 4,000 people.

Other initiatives include a blood donation campaign, with the participation of 35% of the Tangier plant’s workforce, as well as the “Women for Women in Need” initiative that supports local NGOs fighting violence, illiteracy, and poverty.

“Today, more than ever, the contributions of the private sector and the solidarity of individuals, become essential to bring aid to our sanitary systems and to vulnerable collectives,” Adnane said, explaining the initiatives’ motivation.

To carry out some of its initiatives in Morocco, Siemens Gamesa collaborated with several local NGOs, including the High Atlas Foundation and “Amis des Ecoles” (Friends of Schools).

According to Adnane, Morocco has all the necessary conditions to achieve its renewable energy goals. The Moroccan government aims to have 42% of its energy mix renewable by the end of 2020 and increase the share to 52% by 2030.

Morocco’s ambitious plan was one of the reasons why Siemens Gamesa decided to invest in the country in the first place, Adnane revealed.

“We aim to be a long-term strategic partner of choice for all relevant stakeholders pushing the energy transition in the region… We consider we have the experience and right expertise to help create a sustainable ecosystem, not only by providing the technology to produce green energy, but also by creating a local value chain around renewable energy,” she continued.

While Siemens Gamesa is overall optimistic about Morocco’s renewable energy projects, only time will tell if the COVID-19 crisis will make the country run behind schedule in terms of its energy transition goals.