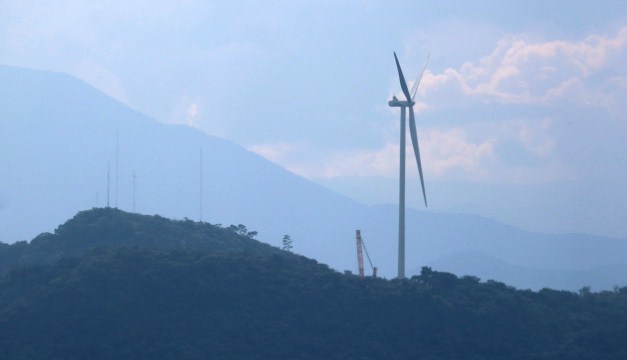 The first of the 15 wind turbines was installed this week in the mountains of Metapán, Santa Ana.
The wind energy project has a total cost of $ 85.5 million for a syndicated loan in which Banco Agro Mercantil (BAM) of Guatemala (50%) and the local Davivienda and Cuscatlán participate.
The construction of the first wind farm in El Salvador is progressing. This week the installation of the project’s first wind turbine was completed, which will take advantage of the force of the wind to produce electricity.

Deputy Francisco Merino published a series of photographs with details of the construction where the 120-meter high tower can be seen, which is already part of the landscape of the north of the department of Santa Ana.
“Yesterday the 1st wind turbine of the Ventus wind farm was installed (…) The wind farm is located in the municipality of Metapán; it will consist of 15 wind turbines; giving a different view to the landscapes of the Calera City,” the official published.
The project is owned by Tracia Network Corporation and is developed by Guatemalan and Honduran investors and has not been stopped despite the restrictive conditions imposed by the covid-19 pandemic.
The first components of the project were received at the Port of Acajutla in the first week of April by ship from China.

Ventus will have 15 wind turbines of 3.6 megawatts each, bringing clean energy to thousands of Salvadoran homes. Ventus ”will provide clean energy equivalent to the consumption of 80,000 Salvadoran families.