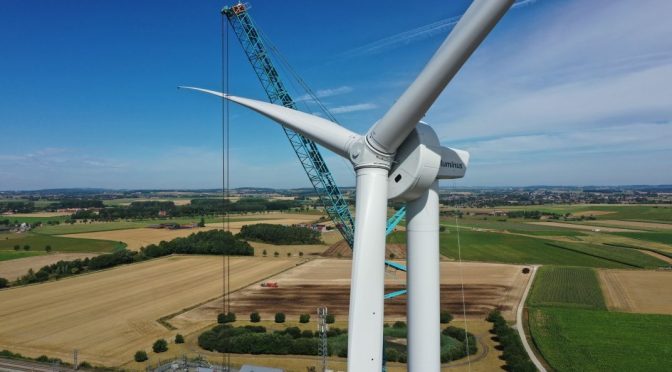 ENERCON installed the E-115 EP3 E3 prototype on a tubular steel tower with a hub height of 92 metres In Leuze, Belgium. This wind energy converter for strong-wind sites completes ENERCON’s EP3 platform portfolio. The design and architecture of various E-115 EP3 E3 components are based on the those of the E-138 EP3. The activities at the prototype site include the adaptation and transfer of the proven parameters from the E-138 EP3 E2 control system to the E-115 EP3 E3.

Thanks to the rigorous use of carryover parts, all WEC types of the EP3 platform benefit from the experience and development enhancements of individual WEC types. This generates synergy effects throughout the entire supply chain encompassing development, procurement, production, logistics, installation, sales and service, and lowers the cost of energy (CoE). “Rotor blades, generator and towers have been specially designed for the E-115 EP3 E3 and cost-optimised,” says Klaas Kinzner, project manager for the E-115 EP3 E3 at ENERCON’s research and development organisation. “The cooperation among the experienced inter-disciplinary development team, the test installation of the E-115 EP3 experimental unit in Lelystad, and the installation of the first E-138 EP3 E2 made it possible to install the prototype quickly and without any problems.” In total, three E-115 EP3 E3 machines will be set up in Leuze. The commissioning of the prototype is scheduled for September. The initial field tests of the E-115 EP3 E3 will provide insights for starting up series production.

The E-115 EP3 E3 will be offered with nominal power ratings of 2.99 and 4.2 MW and hub heights between 67 and 149 metres. In addition, ENERCON developed a version of this wind energy converter that can withstand the special wind conditions in typhoon regions and wind speeds up to 89 m/s. “Aside from the WEC components, the electrical equipment and the control system must meet specific requirements to cope with those weather events that occur primarily in Asia – for example regarding the yawing equipment, because when typhoons hit, a possible failure of the power grid must be taken into account,” explains Dr Jan Carsten Ziems, the project’s lead system engineer at ENERCON’s research and development organisation.