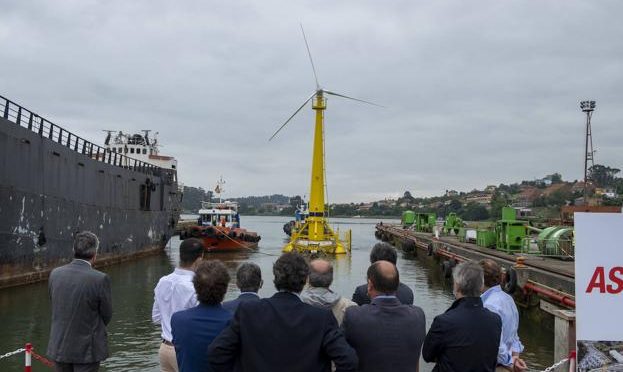 The floating marine platform has been transported from the Pontejos de Astander Dock (Astillero, Cantabria), where it was moored for set-up; to its final location, located 800 meters away from the Cantabrian coast. Afterwards, the anchoring lines already located on the seabed were recovered and the connection was achieved in less than three hours, thus starting the commissioning of the device.
In the meeting prior to the transfer, David Carrascosa, Technical Manager of Saitec Offshore Technologies, stated that this is “the definitive step to test the technology in real conditions”. And he has commented that this type of energy has a very high local content, so it is a lever to generate employment. In addition, he has remarked that this is an emerging market that has tremendous possibilities by eliminating the depth barriers. And he concluded by saying that “we are facing a very good opportunity for Spain to once again be a pioneer in renewables.”

For his part, Miguel Ángel Revilla, President of the Autonomous Community of Cantabria, has assured that “it is a commitment to the future that will undoubtedly have a very important market and that is the result of people from Cantabria and the Basque Country”. He also added: “I am proud that in Cantabria there are people who work in the production of renewables. I wanted to come here today to congratulate them and to bet on the future of energy.”
Finally, Francisco Martín, Minister of Innovation, Industry, Transport and Commerce of the Government of Cantabria explained that “Cantabria has demonstrated its vocation for specialization”. He has also expressed feeling “satisfied and proud of the Cantabrian companies that have participated so that this can become a reality today.”
About the BlueSATH project

The BlueSATH project consists of a test in real conditions of a floating wind turbine at 1: 6 scale of a 10MW (30kW) model with SATH (Swinging Around Twin Hull) floating platform technology. An innovative, competitive and efficient solution for the floating offshore wind farm, developed by Saitec, which has been validated in numerous tank tests since 2014 and which is now starting its first test under real conditions in Cantabria.
The main objectives of BlueSATH consist of the validation of the dynamic behavior of the SATH platform and the analysis of its environmental impact. To this end, the different areas affected during construction, installation and operation will be studied: carbon footprint, aquatic environment, waste, etc. The numerical models of the previous detailed engineering phase will also be compared and validated in order to obtain models that allow a final optimization of the structure, reducing costs and verifying the structural integrity of the wind turbine.

On the other hand, it is intended to identify the variables that best predict the damage in the different elements of the structure; so that its useful life can be predicted through a series of sensors. In addition, potential challenges and risks arising from the logistics and transportation of the demonstrator from the manufacturing / assembly location to its final operating location will be identified.
Regarding the operation and maintenance of the floating wind turbine, the necessary operations will be established to ensure optimal operation thanks to the accessibility system that the platform has.

The Abra del Sardinero, on the Cantabrian coast, has been the selected place for BlueSATH due to its metocean conditions (wind power, waves, currents and depth). An ideal location by offering protection against the severe storms of the Northwest thanks to the presence of the Greater Cape, which manages to greatly attenuate the incident wave heights in the interior of the Bay. This results in a real environment with scaled and ideal conditions to perform this test.