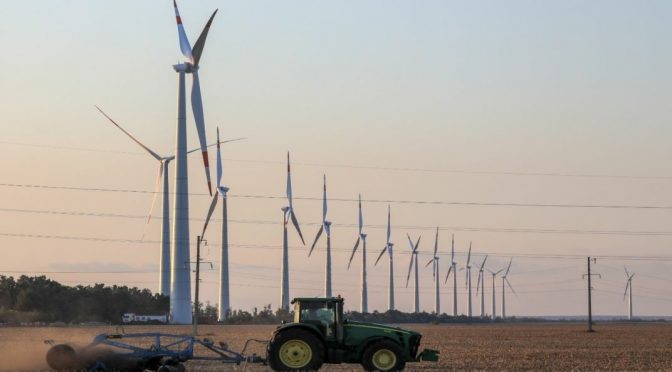 NovaWind JSC has launched the construction of two new wind farms in the Russian South recently: Marchenkovskaya wind farm in the Rostov region and the Karmalinovskaya wind power plant in Stavropol Krai with total capacity of 120 MW and 60 MW respectively. NovaWind JSC is the Rosatom division responsible for wind energy projects.

The site of Marchenkovskaya wind farm will be equipped with 48 wind turbines (WT) with a capacity of 2.5 MW each, and their planned annual average energy output will be 402 GWh. The total volume of investments in the construction of the wind farm amounts to more than 16 billion rubles ($219 million approx.).

As of today, more than 40 units of construction vehicles and more than 100 workers and engineers are already working at the site. The static trials of bearing capacity of soils with bored piles were completed.

The delivery of materials for foundation construction works has begun. Two concrete batching plants with a total capacity of 170 cubic meters of concrete mixture per hour were installed. Works on the excavation of foundation pits and reinforcement of future foundations of the wind farm are in progress.

The Karmalinovskaya WPP will consist of 24 wind turbines with a capacity of 2.5 MW each. The planned project’s investment in the construction stage estimates at more than 8 billion rubles ($109 million approx.). More than 50 construction vehicles as well as 150 workers and engineers have been involved in the building process already.

Currently the bored piles are being installed. Workers are now reinforcing the future foundations of the wind turbines, building crane sites and ensuring vehicle access to the objects and unitized transformer substations. The construction process is accompanied by the concrete production at two concrete plants with a supply of 160 m3 of concrete per hour.

Rosatom is actively implementing wind power projects as part of the strategy of diversification of orders portfolio. Earlier Rosatom completed and connected to the grid its first and the largest wind farm in Russia, The Adygea wind farm that began to supply electric power and capacity to the Wholesale Electricity and Capacity Market on March 2020. NovaWind JSC, Rosatom division responsible for wind energy projects, plans to build wind power stations with a total capacity of 1GW until 2023.