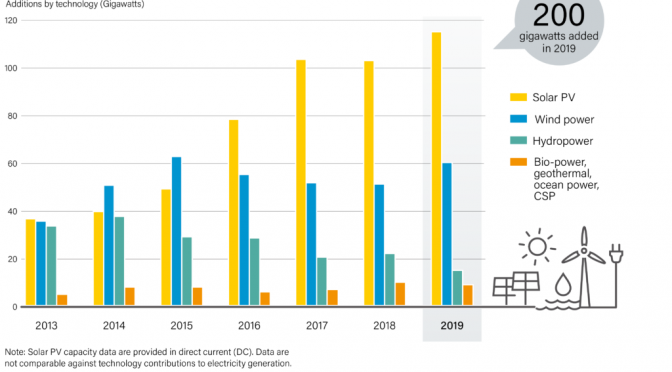 Switching to renewable power is a no-brainer. Progress is slow in the two larger sectors, heating/cooling and transport. Governments continue to subsidise fossil fuels and keep regulatory frameworks in place, which support centralised, high-carbon energy production and consumption.

Renewable energy had another record-breaking year in 2019, as installed power capacity grew more than 200 gigawatts (GW). This was the biggest increase ever. Capacity installations and investment continued to spread to all corners of the world. Distributed renewable energy systems provided more households in developing and emerging countries with access to electricity.

These cost declines have led to record-low bids in tendering processes, which became even more common during the year. However, competitive auctions have led to consolidation in some industries and have favoured larger multinational energy companies rather than smaller actors, including community-led groups.

However, the progress in the power sector is only a small part of the picture. In the heating and cooling sector, and in transport, the barriers are still nearly the same as 10 years ago. Globally, the share of renewables in these sectors is only 10% and 3% respectively. As these sectors are responsible for over 80% of global energy demand, the share of renewables of total final energy demand in all sectors is rising too slowly.

“In the heating and cooling and transport sectors, there are many fewer countries that have renewable energy targets. What is really shocking is that even though there is this knowledge that we have to step up our ambitions in these sectors, there has not been an increase in governmental engagement. That is something that is really critical. It’s as if we were relying on the fact that renewables are a success in the power sector, but forgetting about the fact that power does not tell the whole story”, Rana Adib, Executive Director, REN21

Renewable energy is not competing on a level playing field. While there have been many reports about the divestment movement, fossil fuels are still heavily subsidised and funded. From 2017 to 2018, global subsidies for the consumption of fossil fuels rose by 30% to roughly USD 400 billion. This is more than double the estimated support for renewable power generation.

In many countries, investment in new fossil fuel production and related infrastructure continued. While some countries were phasing out coal, others invested in new coal-fired power plants, both domestically and abroad. Many coal-fired plants announced closures in Europe and the United States. Most of the still-operating and new plants are located in developing and emerging Asia.

China is leading in many renewable energy development. But, Chinese public finance also funded the largest amount of coal capacity in other countries, by far, followed by Japan, the Republic of Korea, France, Germany and India. Funding from private banks for fossil fuel projects continues to rise annually, totalling USD 2.7 trillion between 2016 and 2019.

“I think financing fossil fuels is almost a crime in these times where the influence of fossil fuels on climate, environment and social aspects are clear. If we took the 5.2 trillion US dollars spent per year on fossil fuel and shifted them to renewable energy and efficiency instead, we would contribute so much to advancing the energy transition.” Rana Adib, Executive Director, REN21

In recent years, we have seen plunging costs of renewable technologies, new storage technologies and digitalisation for a better integration between power, heating, cooling and transport sectors. This integration will enable a transition to a world based entirely on renewable energy. In many regions of the world, examples already exist in the power sector.

Countries as diverse as Costa Rica, Djibouti and Sweden have set targets to become 100% renewable in their power sectors, among many other countries. Iceland and Norway already produce all their electricity from renewable energy. Denmark is at the forefront of this movement with a 100% renewable energy target.

“Last year we did a 100% renewable energy concept for Bangladesh. Bangladesh needs offshore wind power and has potential for offshore wind energy, because the population density is so high that without marine-based renewables they would not have the possibility to actually supply themselves”, Dr. Sven Teske, University of Technology, Sydney

In recent years, there has been a growing movement of cities pledging to source 100% of their electricity from renewables.

At least 100 cities worldwide were reportedly sourcing 70% or more of their electricity from renewables by the end of 2018. These include Auckland (New Zealand), Dar es Salaam (Tanzania), Nairobi (Kenya) and Seattle (United States). More than 40 cities were already entirely powered by renewables. The majority are in Latin America, but also elsewhere. Examples include the US cities of Burlington (Vermont), Georgetown (Texas) and Rock Port (Missouri), as well as Reykjavik (Iceland) and Shenzhen (China).