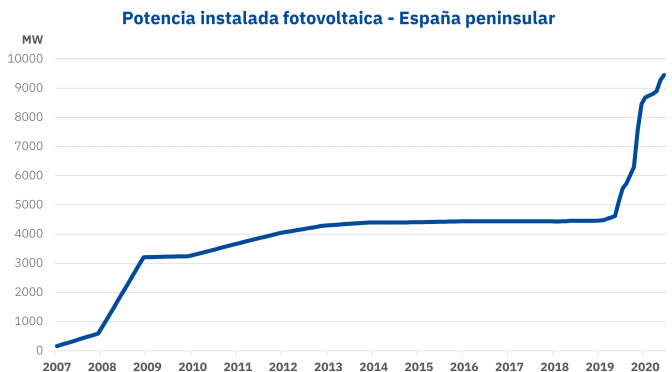 Photovoltaics in Spain does not stop breaking records. Just look at the evolution of production and installed capacity in recent months to see that a clear paradigm shift has occurred: from a stagnant situation for a decade to a true photovoltaic revolution.
Although 2020 is not being a year to shoot rockets in general, the good news of photovoltaics in Spain continues to arrive in a year where this technology in Spain does not stop breaking records. The first good news started in June 2019, when more MW of photovoltaic were installed in a single month than in the last seven years. And from there, photovoltaic capacity has not stopped growing without stopping, with growth that has exceeded double digits in a few months.

The boost received by the auctions of renewables and by the ambitious objectives of the National Integrated Energy and Climate Plan (PNIEC) has been the key to this explosion of photovoltaics after a decade of total stagnation. The Spanish PNIEC has designated photovoltaics as the technology that will lead the energy transition and decarbonization of the electricity sector in Spain. The objective of the Plan is to reach almost 40 GW of photovoltaics in 2030 and to position itself as the second technology in installed capacity, only behind wind power.

With regard to the production of electricity, the records of photovoltaics have been happening since the beginning of the year. In February, instant production records began to be set, a record that now corresponds to the end of June. Also in February, solar, photovoltaic and concentrated solar power, for the first time exceeded the instantaneous production of nuclear. But the records don’t end here; In this 2020, only until July, photovoltaics has already produced more electricity than in all of 2019 and 20% more than in all of 2018.

If we look at the coverage of peninsular electricity demand by photovoltaics, for the moment the daily record stands at 13.2% on May 3, 2020. A share of demand coverage that, in addition to the the increase in photovoltaic production was also favored by the low demand on a Sunday with the confined population and the commercial and industrial activity at a minimum due to the COVID-19 pandemic. In any case, with the growth rate of photovoltaics, it is sure that this figure will soon be exceeded again.

As for the solar thermal, it has not yet begun its explosion like the photovoltaic, but it is expected that concentrating solar power will play a very important role in the energy transition, thanks to its energy storage capacity and the possibility of continuing to generate electricity after sunset, to cover part of peak demand in the afternoon and evening. Currently the installed capacity is at 2.3 GW and the objective of the PNIEC is to reach 7.3 GW by 2030 of concentrated solar power.