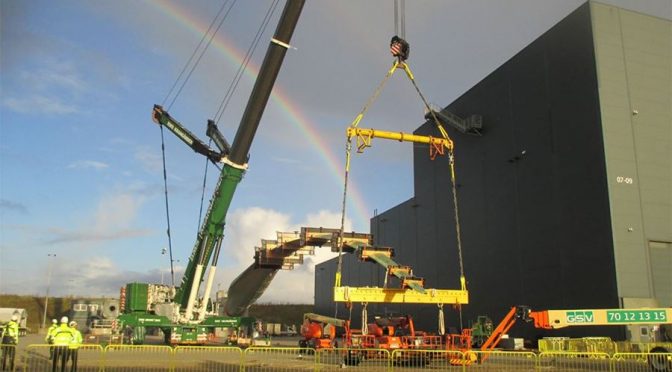 Siemens Gamesa’s blade test center in Aalborg, Denmark, home of the world’s largest test stand, is the first non-commercial inhouse blade test facility in the world to gain IECRE approval. The approval was granted in the highest level required (stage (4) with a high independency of certification bodies.

The wind turbines and components must be tested for different aspects including wind speed and direction, power performance, blade design and fatigue life, impact of diverse weather conditions and more.

Rasmus Ladevig, Head of the Blade Test Center in Aalborg, Denmark, led the IECRE approval process from Siemens Gamesa’s side and says: “The most important thing for us is to create trust with our customers. The IECRE approval means that our customers can be confident that we have carried out the blade tests according to the international standards of IEC whether it was at our own test center or at an external test center.”

How are the blades tested?

The structural integrity of the blade is tested in several ways. In the static test, the blade is pulled quite hard once to simulate a wind gust hitting it. The test is either performed outside using mobile cranes or inside the test center using pulling stations. The blade is equipped with loading clamps and is tested in four directions by rotating the blade on the test foundation.

In the dynamic test the blade is moved up and down 2-4 million times in order to see whether it fatigues. The purpose of this test is to simulate the stress on the blade during its lifetime in operation.

It takes nine to 12 months to perform all the tests on one blade.

Vicente Garcia Munoz, Head of Validation Means Management within Corporate Technology explains, “We want to be leaders in the wind industry, and testing plays a key role in our validation and verification strategy. Reliability of our products starts with our design teams listening to our customers’ requirements at an early stage. We discussed the IECRE accreditation with customers months ago and decided to start the certification process early instead of waiting. IECRE is all about increasing quality standards in a harmonized way across suppliers and we are leading the way.”

Siemens Gamesa recently invested significantly in a new test stand for the blade test center in Denmark to be able to perform full-scale tests on future generations of Siemens Gamesa rotor blades.

The test stand is the largest in the world and has more steel rebar reinforcement per square meter than a wind turbine foundation, in order to be capable of accelerating the test and proving full reliability over the lifetime of the blade in the shortest possible time, while fully respecting IEC regulations.

Most of us probably know that ISO 9001 is a standard for quality control which many companies – SGRE included  – live up to. But in the renewable energy industry we must also comply with certain norms and standards developed in IECRE, the IEC (International Electrotechnical Commission) for Certification to Standards Relating to Equipment for Use in Renewable Energy Applications.
This body offers testing and certification which reassures investors, manufacturers and users of renewable energy technologies that these are safe and function correctly wherever they are in the world. The system covers the wind, solar photovoltaic and marine energy sectors.