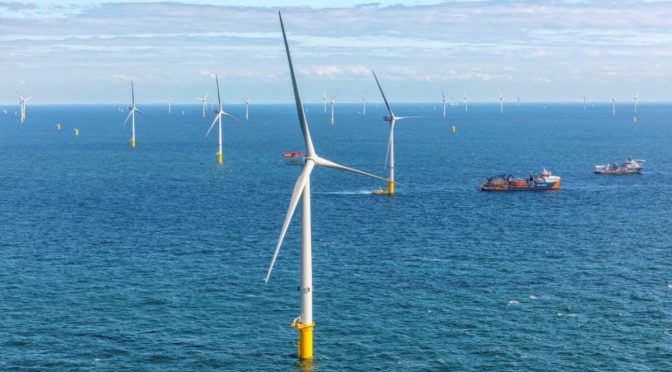 The first of over 825,000 Dutch households is now receiving clean electricity from the Borssele III/IV offshore wind energy project as first power is flowing to the Dutch grid.

As of today, the 731.5 MW Borssele III/IV offshore wind farm has achieved first power, a result of close collaboration between the Blauwwind project partners and the supply chain. The wind turbine installation campaign began in late May 2020 and has now seen 36 of the 77 V174-9.5 MW MHI Vestas wind turbines secure at site.

Borssele III/IV is due for completion in October 2020 and when fully installed, will supply enough clean renewable energy to power more than 825,000 Dutch households, accounting for up to 2.3% of total Dutch electricity demand.
“With the Borssele III/IV offshore wind power project now online and delivering electricity to the grid, Dutch consumers can be certain they are moving towards a clean energy future,” said Laurens van Pijkeren, MHI Vestas Project Director. “The collaborative efforts of all project partners has enabled MHI Vestas to install 36 of the largest wind turbines in the world on schedule, despite a myriad of challenges arising from Covid-19. We look forward to continuing our collaboration with the Blauwwind project partners as we move towards completion of the project later in 2020.”
“I am proud of the team that has managed the safe execution and the commissioning phase, achieving first power on time,” says Roeland Borsboom, Project Director and CEO for Blauwwind. “Keeping a project of this scale and complexity on track in these challenging times can only be managed through good collaboration and flexibility. The delivery of first power has been achieved in close collaboration with partners Van Oord, MHI Vestas and TenneT, who has provided grid readiness one month ahead of time.”

Throughout the rest of the installation campaign, it is anticipated that one additional wind turbine will become operational per day, following control testing. Following installation and full commissioning, MHI Vestas also holds a 15 year service agreement to operate and maintain the Borssele III/IV project.

The Borssele III/IV offshore wind power project, which is situated 22 km off the coast of Zeeland, Netherlands, is being developed by the Blauwwind consortium, consisting of Partners Group, Shell, Eneco, Diamond Generating Europe and Van Oord.