The National Energy Plan 2050 estimates that wind farms can reach between 110 GW and 195 GW of operating capacity in the coming decades. 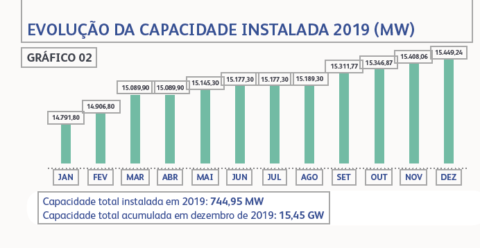 Wind power is the second source of the Brazilian electric matrix, only behind hydroelectric power, according to the National Electric Energy Agency (Aneel). The installed capacity is 16 GW, according to data published in June 2020 by the Brazilian Association of Wind Energy (ABEEólica).

The use of wind as useful mechanical energy was made possible through technological advancement and was encouraged as it is a clean and renewable energy that does not emit greenhouse gases.

According to the International Renewable Energy Agency (Irena), if wind and photovoltaic systems replace 500 GW in coal, they would help reduce the costs of the energy system by up to $ 23 billion a year. The global annual drop in carbon dioxide emissions would be approximately 1.8 gigatons (Gt), equivalent to 5% of total emissions in 2019.

To obtain energy, it is necessary to convert the kinetic energy in moving air masses into wind energy into rotational kinetic energy. Wind turbines, called wind turbines, generate electricity, especially if they are in large parks; Pinwheels and mills perform mechanical work such as pumping water.

Brazil is seventh in the world ranking of the World Wind Energy Council (GWEC). For the first semester of 2020, 637 wind farms and 7,738 wind turbines were reached.

According to ABEEólica, the estimate is to have around 24.2 GW of installed capacity by 2024, considering auctions already held and contracts signed on the free market.

To expand this infrastructure, it is important to plan, choose the appropriate locations, and perform many tests and reviews, in a project with several essential steps for full operation.

According to Bloomberg New Energy Finance (BNEF), the wind industry invested R $ 13.6 billion in the country in 2019. The result was the generation of 355.9 TWh of energy, 15% more than the previous year and sufficient to supply 28.8 million households per month in 12 states, serving 86.3 million people, considering three inhabitants per household.

The country is favored by the quality of the winds, which are stable, with adequate intensity and without sudden changes in speed or direction. In 2019, the capacity factor, data that measures wind productivity, was 42.7%. During the “harvest of the winds”, from June to the end of the year, there was an average month of 59%. The world average was 34%.

According to the Energy Research Company (EPE), the average residential consumption in Brazil, in 2019, was 162 kWh per month. It represented a growth of 12.6% in relation to the previous year, when wind energy supplied 76.7 million people.

According to the technical note “Potential of energy resources in the Horizon 2050” prepared in 2018 by the Ministry of Mines and Energy, the country needs to overcome technical, socioeconomic, environmental and infrastructure problems that can be obstacles to the full use of wind resources. and for the consequent opportunity to boost the national economy.

Wind power generation can be a source of income and life improvement for landowners by paying leases, which are subject to taxes, to run more than 7,000 wind turbines.

The use of the wind power  is achieved when it passes through the blades of a turbine designed to capture its kinetic energy, moving an axis that connects the rotor and the generator, and converts it into electricity.

To install a wind farm, several steps must be completed. The first part is to carry out economic and topographical feasibility studies, characterization of the wind in the region and regularization of land tenure.

After obtaining the necessary approvals, contractors, and hired labor, the installed construction site, work begins with cleaning the area, moving earth when necessary, and opening external and internal access roads. After the construction of the foundations and bases, the towers and wind turbines are assembled.

The wind turbine includes an anemometer, which measures the intensity and speed of the wind. There is also a windsock that, like airports, captures the direction of the wind. It has control mechanisms to adapt the nominal power to the wind speed. The nacelle is a compartment with gearbox, brakes, clutch, bearings, electronic control and hydraulic system. The turret keeps the rotor and nacelle at the proper height for operation.

The next step is to carry out the electrical assemblies, the wiring and the interconnection, in addition to the construction of the substation and the control house.

The commissioning phase, that is, the testing phase of the performance of the wind farm at maximum generation capacity, is crucial to guarantee the best performance of the equipment and components. Many companies resort to renting cargo banks. This team, therefore, is responsible for the prevention of possible failures in the power supply at a stage prior to the connection of the network.