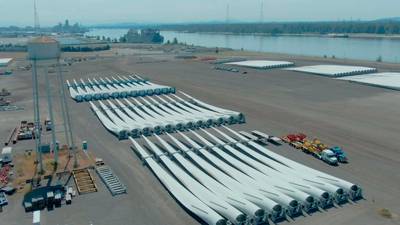 The Port of Vancouver USA received a shipment of wind turbine components on July 22 that included the longest wind turbine blades ever to enter the West Coast of the U.S. and transported across North America, to-date.

The port received a total of nine wind turbines including blades, nacelles, generators, hubs, tower sections and other sub-components. Eight of Goldwind’s GW155/4.2 MW wind turbines arrived on the MV Star Kilimanjaro. There are four complete wind turbines featuring Goldwind’s 76-meter blades and four additional turbines of the same model with blades arriving on later shipments. These are the longest blades ever transported across North America. Measuring nearly 250 ft. in length, the blades are nearly as tall as the Statue of Liberty. The remaining components on this vessel include one set of 67-meter wind turbine blades for the same 4.2 MW rated power capacity wind turbine.

“Wind manufacturers have kept us busy this spring and summer moving wind energy components,” said Julianna Marler, CEO of the Port of Vancouver USA. “We couldn’t do this work without incredible partnerships with companies like Goldwind, as well as ILWU Local 4, Local 40, Local 92, and the river and bar pilots who are still at work every day moving cargo.”

“Our customers know we can handle this large cargo with our heavy lift cranes, acres of laydown space, highly-skilled workforce and dedication to renewable energy,” said Chief Commercial Officer Alex Strogen. “We also want to thank Jones Stevedoring, Totran Transportation Services and the ship MV Star Kilimanjaro operated by G2 Ocean. This is their second visit to the Port of Vancouver with wind components from Goldwind.”

“The arrival of Goldwind’s 76-meter wind turbine blades to our shores signifies an important next step in wind power technology in North America. As a result of our expanding portfolio of wind turbines, Goldwind is able to maximize project economics with larger, scalable technologies to fit an array of wind projects,” said David Sale, CEO of Goldwind Americas.

The wind turbine blades and components will travel to Assiniboia, Saskatchewan, Canada to Potentia Renewable’s Golden South Wind Energy Project located on 34,000 acres of leased-agricultural land. The Golden South Wind Project will utilize Goldwind’s latest PMDD turbines and will generate approximately 900,000 megawatt-hours of electricity. The project broke ground in 2019 and is expected to open in 2021.

Once unloaded from the ship, the wind turbine blades and other major components will be moved to laydown space at the port’s Terminal 2 and Terminal 5. From there, they will be transported by Totran Transportation Services over the span of several months to Saskatchewan, Canada.

The port will eventually handle a total of 50 full turbines, a combination of the GW 136/4.2 and GW 155/4.2 MW models, for the Golden South Wind Project. Four additional ships carrying turbines will arrive later this summer and fall. In total, Goldwind will import more than 750 large-scale components through the Port of Vancouver USA.