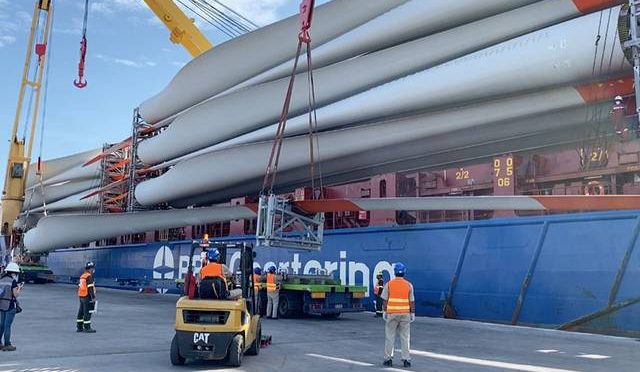 The first wind farm to generate electricity with wind energy will be built in La Paz, which will produce an additional 50 MW to the state’s electrical system.
“In Baja California Sur we will support any project that contributes to solving the most pressing needs for citizens, and that are friendly to the environment,” said Governor Carlos Mendoza Davis, after announcing the start of construction of the plant El Coromuel wind farm, from the company Eurus Energy America Corporation, the first wind power plant in the entity, which will be located on land belonging to the New Ejidal Population Center (NCPE) Alfredo V. Bonfil, at kilometer 69 of the La Paz-Ciudad Constitución highway.
In this regard, the state president explained that the project consists of the installation of 20 wind turbines of 2.5 MW each, with the total capacity to generate an additional 50 MW for the entity’s electrical system, in order to help meet the demand for electric power in Baja California Sur, particularly in the area of ??La Paz and Los Cabos, with clean and sustainable energy.

“We are very happy to attract investments to our state such as that of the El Coromuel wind farm, because with the generation of clean energy that will be produced through turbines, using the wind as a renewable source, 50 extra MW will be obtained to greatly mitigate the problems that have arisen with the traditional electrical system in the entity since last year, “he said.

Likewise, the Governor added that once in operation, the plant will avoid the local emission of pollutants, which are currently produced by conventional thermal generation based on fuel oil and diesel, which will reduce greenhouse gas emissions .

The project represents an investment of one thousand 700 million pesos, and includes the placement of 20 wind turbines, a 115 kV switching substation; The interconnection will be through the opening of the transmission line, a collecting substation, which will receive the load of two radial feeder circuits of 10 medium voltage wind turbines each, which are underground and aerial, aerial transmission line and right-of-way line. 115 kV.