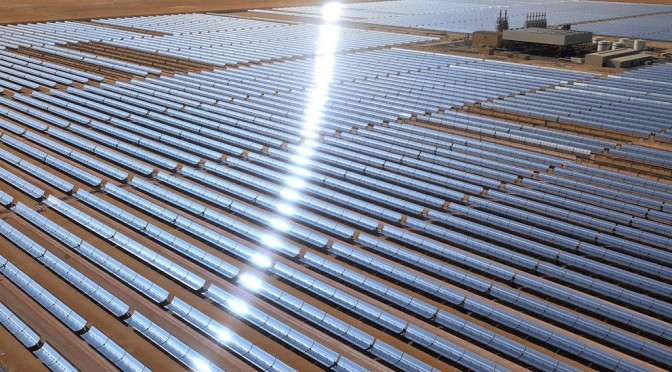 The future solar photovoltaic plant will be located in the region of Al Dhafra, 35 kilometers south of Abu Dhabi City. With a capacity of 2 GW, it will be the largest single-project solar plant in the world and will generate the equivalent electricity to power over 160,000 local households each year.

The plant will be the first one on such scale to deploy bifacial module technology, meaning that both sides of the PV modules capture light to yield higher generation.

A call for tenders was launched in June 2019 by Emirates Water and Electricity Company (EWEC), a leading company in the coordination of planning, purchasing and providing of water and electricity across the UAE. EDF Renewables – Jinko Power submitted the most competitive bid of 1.35 USD cent per kilowatt-hour on a Levelized Electricity Cost basis.

The project is under a public-private partnership (PPP) scheme. EDF Renewables and Jinko Power will hold 20% each. The 60% remaining share will be owned by TAQA and Masdar, the two Abu Dhabi based public-owned major players in the electricity sector.

The partners have signed the 30-year Power Purchase Agreement (PPA) this week with EWEC. They are mobilized to start the construction works by the end of 2020 in order to reach the commissioning planned in 2022. The project will generate over 4,000 jobs during the construction phase.

“We are very proud to be awarded the largest solar project in the world at Al Dhafra. This success reflects the quality of our competitive bid submitted to EWEC, in partnership with Jinko Power.

After the construction of the 1 GW solar power plant in Dubai with our partners DEWA and Masdar, and the implication in the built of the Hatta hydroelectric power plant, this new ambitious project represents a major step forward in EDF group’s renewable energies development in the UAE.

It also contributes to meet the EDF Group’s CAP 2030 strategy, which aims to double its renewable installed energy capacity from 2015 to 2030 worldwide to 50 GW nets”.

The Al Dhafra project marks not only another important milestone in utility scale generation in Abu Dhabi, it will set a new record in single plant generation capacity and competitive tariff. Along with our other business pipelines executed globally, Jinko Power continues to deploy its commitment of supplying renewable energy for the great benefit of consumers, off-takers, and the globe”.

A key player in energy transition, the EDF Group is an integrated electricity company, active in all areas of the business generation, transmission, distribution, energy supply and trading, energy services. A global leader in low-carbon energies, the Group has developed a diversified generation mix based on nuclear power, hydropower, new renewable energies and thermal energy. The Group is involved in supplying energy and services to approximately 38.9 million customers1, 28.8 million of which are in France. It generated consolidated sales of €71.3 billion in 2019. EDF is listed on the Paris Stock Exchange.