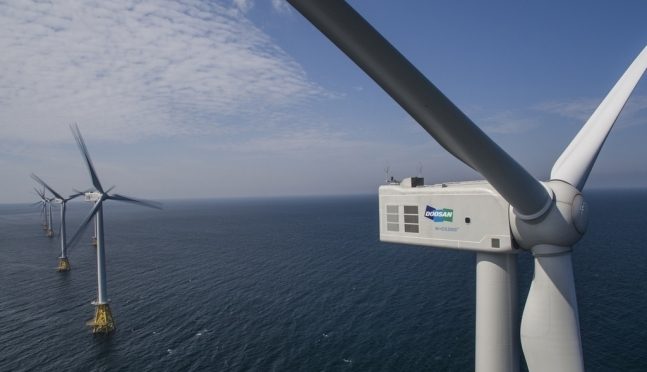 CEO Park Gee-won said his company would contribute to creating South Korea’s ecosystem for offshore wind turbines as a leading company in the field and pledged to be actively get on board with the government’s Green New Deal.

“The domestic market is expected to grow rapidly thanks to government measures for developing offshore wind energy,” Park said.

During a visit to a wind farm in Buan, North Jeolla Province, on Friday, President Moon unveiled plans to raise the country’s wind power generation to 12 gigawatts by 2030. The country’s capacity currently stands at 124 megawatts.

Having begun its research on offshore wind power technology in 2005, Doosan Heavy Industries & Construction is currently the only company here that can solely manufacture offshore wind power generators. It has supplied 79 offshore wind turbines across the country, with the total amount of orders worth 660 billion won so far.

South Korea earmarked 14 trillion won for building offshore wind farms with a capacity of 2.4 gigawatts (GW) on its southwestern coast by 2028 to supply power to around 2.24 million households.

The total budget will be raised from the private sector.

The project set to rise in the North Jeolla province is in line with the country’s efforts to minimize fossil fuel-powered energy generation.

South Korea, which has been reducing traditional fossil fuel consumption, vowed to expand its offshore wind power capacity to 12 GW by 2030.

The Ministry of Trade, Industry and Energy said the country is on track to reach the target by 2030, with several projects pending in other areas.

It also aims to reach 30 to 35 percent of renewables in its energy mix by 2040, equivalent to 130 GW of renewable energy.

The program could generate around 659,000 jobs.