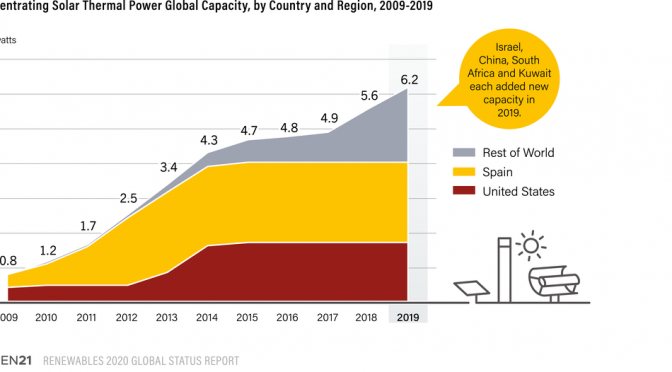 The Concentrated Solar Power industry has become increasingly diverse geographically, in terms of the location of commercial plants as well as the origins of developers, investors and contractors involved in project implementation. CSP projects that either entered operations or were under construction during 2019 involved lead developers and investors from at least eight countries including China, France, Israel, Kuwait, Saudi Arabia, Spain, the United Arab Emirates and the United States. 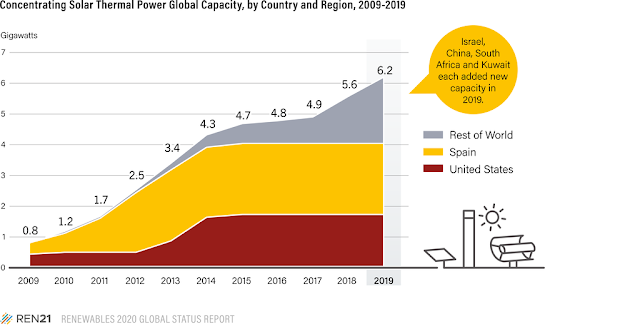 Contractors were based in China, Denmark, Israel, Spain and the United States, with Chinese companies involved in almost half of the completed or active projects.
By contrast, before 2015 most CSP companies hailed from the United States and Spain.

The Saudi company ACWA Power remained the leading CSP project developer in 2019, with around 700 MW of projects under construction.
Other notable developers, investors or owners of Concentrating Solar Power plants that either entered operations or were under construction during the year included EIG Global Partners (United States), ENGIE (France), Royal Tech (China), Noy Fund and Shikun & Binui (both Israel), as well as at least 13 other developers from around the world.

With the spread of markets around the world, the broadening of supply chains and increasing experiences in the industry, costs have continued to fall. 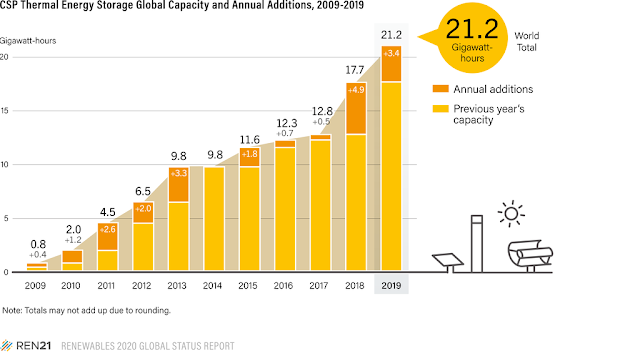 Lower total installed costs combined with longer or more flexible power purchase agreements and higher capacity factors (thanks largely to including TES and the shift towards locations with better resource conditions for CSP) have reduced the cost of electricity from CSP.

Despite these advances, developers of CSP with TES faced strong competition from projects coupling solar PV and wind power with battery storage, which were increasingly prevalent in 2019.

In many cases CSP and TES capacity are being combined with solar PV and/or wind power capacity in hybrid facilities to lower costs and increase capacity value. For example, Israel’s Megalim and Negev CSP plants each are located alongside solar PV plants, and China’s new 50 MW Luneng Haixi plant forms part of a 650 MW renewable energy complex that also includes 200 MW of solar PV and 400 MW of wind power capacity, plus 50 MW of storage capacity.
The 110 MW Cerro Dominador plant in Chile will incorporate 17.5 hours of TES alongside an existing 100 MW solar PV plant.

In 2019, a hybridised project in Morocco that will combine CSP, solar PV and energy storage was awarded by the Moroccan Agency for Sustainable Energy at a tariff of MAD 680 (USD 68) per MWh.
Contractual agreements for the United Arab Emirates’ NoorEnergy 1 project, which will combine 700 MW of CSP capacity with 8.1 GWh of TES and 250 MW of solar PV capacity, were finalised in early 2019 based on a CSP tariff of USD 73 per MWh in parallel with a solar PV tariff of USD 24 per MWh.

Also in 2019, a range of R&D activities were under way that aimed to further reduce the costs of CSP. Some of this work focused on increasing system operating temperatures in order to unlock greater thermal energy efficiencies.
For example, a partnership between the French utility EDF and Chinese CSP technology company Shouhang aimed to convert an existing CSP demonstration project from using a steam cycle for thermal power generation to using a closed-loop supercritical CO2 cycle, which is capable of higher operating temperatures.

In the United States, a government-backed programme at Sandia National Laboratories was focused on developing a CSP central receiver that is capable of operating at temperatures above 1,000 °C, allowing for greater heat concentration.
Also in 2019, the US Department of Energy announced USD 30 million in support for 13 research projects, with the goal of improving CSP economics by reducing manufacturing costs, developing new storage technologies and allowing for more autonomous system operations.

R&D attention during the year also was focused on addressing the environmental impacts of CSP. In Europe, for example, researchers were evaluating novel ways to reduce water consumption for heliostat cleaning through the development of ultrasonic cleaning systems and hydrophobic coatings.