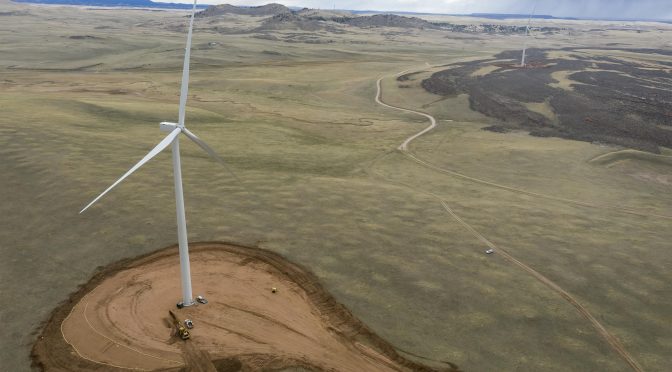 Along a windy stretch of the Rocky Mountain foothills in southern Wyoming, a small army of new wind turbines has started spinning.

In late June, developers flipped the switch on the Roundhouse Renewable Energy Project, Northern Colorado’s largest source of wind energy to date. The project comprises 83 new wind turbines scattered along the state line, as well as a new transmission cable that carries the electricity it produces south.

Ryan Fitzpatrick, a developer for Florida-based NextEra Energy, which owns and operates the wind farm, says it generates enough electricity to power around 100,000 homes.

“There’s a lot of renewable resources in Wyoming,” Fitzpatrick said. “It’s great to start bringing some of that Wyoming wind down to serve Colorado communities.”

Regional utility managers say the project’s addition to the power grid is a significant step forward in achieving Northern Colorado’s climate goals. Electricity generation accounts for roughly 27% of the country’s greenhouse gas emissions, according to the EPA, making it the second-largest source after transportation.

In recent years, electric utilities across Colorado have laid out plans to ditch carbon-emitting sources of energy such as coal in an effort to clean up the sector.

Steve Roalstad, Platte River’s spokesman, estimates electricity purchased from Roundhouse, along with other renewable projects, have helped the authority achieve 50% of that goal.

“About half the electricity that people use for their daily lives — for air conditioning, laundry, making toast and coffee in the morning — half is now coming from non-carbon resources,” said Steve Roalstad, Platte River’s spokesman.

This fall, Platte River plans to bring a new 22-megawatt solar farm online. The co-op also recently announced plans to retire the region’s only coal-fired power plant by 2030, nearly 16 years ahead of schedule.

“Our communities are speaking up and communicating with elected officials that we need to move in this direction,” Roalstad said. “We’re following that by taking significant steps and we’ll take even more in the years to come.”
The Rawhide Unit 1 coal plant north of Fort Collins. The plant is being retired by 2030, nearly 16 years ahead of schedule, thanks to new renewable projects.

Colorado currently ranks eighth in the country for its amount of wind energy, according to the Energy Information Administration. New wind projects like the Roundhouse farm have become significantly more economical to build in recent years, according to industry experts.

Daniel Laird, director of the National Wind Technology Center at the National Renewable Energy Laboratory in Golden, says the cost has dropped roughly 70% over the past decade.

But while the cost to bring new wind farms online is becoming less of an issue, wind energy as a whole is less predictable than fossil fuels, nuclear and hydropower, said Laird.

“As the levels of renewables go up, we’re going to need to operate the grid differently than in the past,” he said.

That means relying on infrastructure like more high-speed communication systems, which are susceptible to cyber attacks. The rising popularity of electric vehicles will also increase demand on Colorado’s power grid in the near future, putting additional stress on utilities.

“Our grid still needs to transform and bring together these separate energy systems that are starting to combine into a larger, much more complex system,” Laird said.

And making that all happen will take time. Major utilities like Xcel Energy say they won’t have 100% carbon-free electricity until 2050 — the same year Colorado lawmakers have set as the statewide goal for zero-carbon electricity statewide.

NextEra Energy’s Ryan Fitzpatrick says the company hopes to expand the Roundhouse project in the coming years if the partnership with Northern Colorado communities proves successful.

“We’re shovel-ready,” Ftizpatrick said. “There’s a lot of work that goes into these projects — a lot of permitting, discussions with stakeholders, and when you get to this point it’s great. Then, you’re onto the next.”