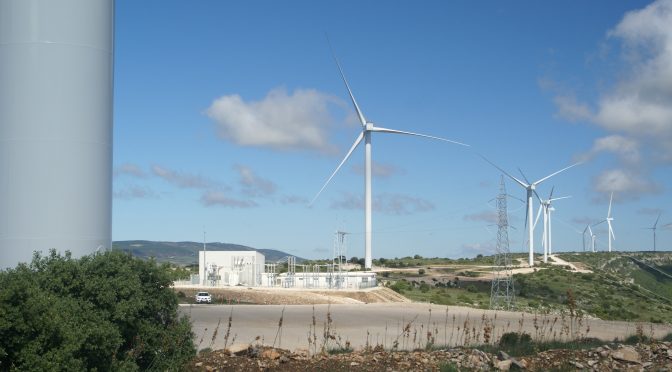 Imagine that the energy transition is a train track. Two parallel rails are ready to connect the energy mix of the past to the next station, which is sustainable development. On one rail runs renewable energies, which are pervading the nation faster and faster every day. On the other rail runs something equally important, the decarbonization process. The crossties connecting the two rails and guaranteeing safe travel are gas, the strategic ally of the energy transition that ensures the equilibrium of the electrical system.

“A gas power station produces at least 60% less carbon emissions. And in any case, if Italy’s Energy and Climate Plan is to be respected, developing renewables won’t be enough. We’re going to need gas for a little while.”

Since Enel Green Power’s journey on the road to sustainable energy began in 2008, it has never stopped. In 2019, Enel Group’s installed capacity from renewable resources worldwide had exceeded that from thermoelectric sources. In the first quarter of 2020, production of zero-emissions electricity had reached 64% of the Group’s total generation.

In Italy, phasing out coal is forecast for 2025, while the global forecast is for 2030. In Italy, the “traffic light” for renewables has become even greener thanks to new renewable capacity being awarded to Enel Green Power through the Power Services Board’s second Renewable Energy Sources tender.

After having been awarded nearly 80 MW of capacity in January 2020, the second tender charged us with realizing 68 MW of additional renewable capacity through two wind projects in Campania and Basilicata along with 38.3 MW of power from restructuring hydroelectric plants already in service in Castiglione dei Pepoli (Bologna), Civitella in Val di Chiana (Arezzo) and Montecreto (Modena).

“This second allotment enables us to prove our commitment to investing in new renewable capacity in Italy, thereby contributing to achieving Enel Group and the nation’s decarbonization objectives. Thanks to our development strategy, in 2019, the Group’s installed capacity from renewable sources worldwide had exceeded those from thermoelectric sources, marking further progress in progressively substituting fossil fuel sources with zero-emissions sources.”

Our development pipeline calls for new renewable capacity around the world. Since the beginning of 2020, we’ve connected two US plants, Whitney Hill and Road Runner, to the electric grid, while in Spain, work has started on the Los Naranjos (Andalusia) photovoltaic power station and the Los Gigantes (Aragon) wind farm. New renewable energy is also coming to the Balearic Islands. Work has already begun on the Sa Caseta photovoltaic plant in Majorca, while authorization to build 6 more photovoltaic plants will be received shortly, following an award of capacity through a renewable energy tender.

Brindisi, an early good-bye to coal

New renewable capacity is only one of the energy transition’s two rails. Thus, in Italy, Enel Group has received a green light from the Ministry of Economic Development to close Unit 2 of the Federico II thermoelectric power station in Brindisi early, at the beginning of January 2021. In line with our decarbonization strategy and with the National Integrated Energy and Climate Plan’s (PNIEC) objectives, we’ve recently launched a procedure to convert the site into a high-efficiency gas plant. Additionally, EGP has developed new projects to install photovoltaic capacity within the site.

This plan ensures that Brindisi’s coal plant will be completely closed by 2025 and guarantees the safety of the national electric grid. Natural gas is an essential ally of the energy transition, as it’s able to guarantee electric grid stability and cut carbon dioxide emissions by up to 60% once conversion is complete.

Early closure of the Federico II power station in Brindisi is only one strand of Enel Green Power’s sustainable fabric. Early closure of the Bocamina coal-fired plant in Chile has been set out in two steps by Enel Group. First, shut down operations in Unit I on 31 December 2020 and shut down Unit II on 31 May 2022. Secondly, simultaneously complete 2 GW of renewable capacity in the country. The green light only needs to be given by Chile’s Ministry of Energy. Just last year, our phase out plan forecast closure of Bocamina I at the end of 2023 and Bocamina II by 2040. We plan to reduce carbon emissions 18 years early.

The electric grid will be stable, and all the rest will be possible thanks to the 2 GW of renewable capacity that Enel Green Power intends to complete in Chile, half of which is already underway. In fact,  Chile’s first ever hybrid power station is under construction thanks to the Azabache (60.9 MW) photovoltaic power plant being combined with the Valle de los Vientos (90 MW) wind farm.  The Campos del Sol (382 MW) solar project and the 33 MW expansion project of the 48 MW Cerro Pabellón geothermal plant, the only one of its kind operating in South America, are also underway in Chile.

?Accelerate renewables and phase out coal using gas to stabilize the electric grid: Enel Green Power and Enel Group renew their commitment to solid, disruptive decisions about the energy transition track. Next stop, a future of sustainable energy.