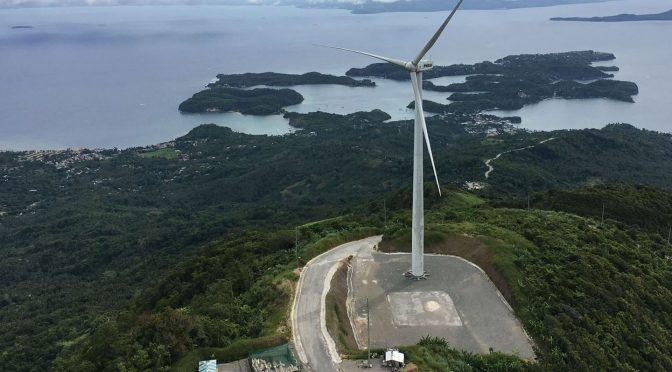 The far-flung, volcanic Galapagos Islands visited by Charles Darwin in 1835 as part of his round the world survey voyage played an important role for him in writing his theory of biological evolution ‘On the Origin of Species’ published in 1859.
To this day, the islands are a focal point for further generations of conservationists who aspire to preserve his legacy and help conserve the environment and rich biodiversity of both this cluster of islands as well as of the planet.

The Galapagos Islands, which lie around 1,000 km off mainland Ecuador, are also important in Siemens Gamesa’s own history as the company’s first hybrid energy project was installed there in 2007. Today, hybrid energy projects are becoming increasingly influential as operators of electricity grids look to maximize renewable energy and reduce the intermittency of wind or solar power.

Hybrid projects nowadays tend to combine solar or wind energy with a battery storage facility, allowing energy to be stored when it is not needed and released when demand picks up. This energy can either be supplied to an electricity grid, helping to smooth supply to our homes, or work as an off-grid solution, which can be useful for remote islands which often lack access to a grid.

And this was the case for the Galapagos Islands, which relied on diesel for its electricity generation until Siemens Gamesa installed its first hybrid project combining wind with diesel energy production. While a small project, the installation on the island of San Cristóbal reduced diesel emissions by close to 40% in its first year, helping in turn with the island’s conservation commitments.

“The project was one of the first of its kind in the world in an isolated location and had a considerable effect on reducing diesel emissions. Twelve and half years on, and it is still a reference in the beginnings of hybrid energy,” said Alberto Alonso, Head of Renewables and Storage Power Plants Integration Testing, who worked on the Galapagos project.

Indeed, the plant received a number of global industry accolades following its launch.

“There was a lot of expectation surrounding this plant, as it really was one of the first in the world, so it became a benchmark for the Galapagos and Ecuador. The park is famous now and as it is in a prominent position everyone who visits the island sees it,” said Fernando Naranjo at Elecgalapagos which runs the park on San Cristóbal island.

According to data from Elecgalapagos, the wind park has saved close to 3 million gallons of diesel since it was launched 13 years ago, and saved over 26,000 tons of CO2 emissions. From pilot project to take-off Since the Galapagos project, hybrid energy projects have significantly evolved to offer solutions to today’s electricity markets. And for Siemens Gamesa to get there, its La Plana pilot hybrid project inaugurated in 2016 close to Zaragoza in Spain, has played a fundamental role. This plant uses a combination of solar, wind, diesel, and battery storage. All of these elements are connected through an own-brand monitoring system called HPC (Hybrid Plant Controller) which optimizes the performance of each segment.

Indeed, the HPC is the brain for the modern hybrid plant, explained Hernando Castillo, Hybrid Systems and Projects expert at Siemens Gamesa. “The HPC can accurately use the weather conditions predictions that will affect the plant, and also knows exactly when and how much energy needs to be stored in the battery.”

The development of the HPC will be put to the test in the Philippines at a facility currently being installed by Siemens Gamesa at Puerto Galera on the island of Mindoro. This hybrid plant for Berkeley Energy will combine a wind farm with a storage facility and will cut the island’s reliance on diesel for electricity substantially, and in turn its emissions. Read more here.

Plants like these can offer isolated islands or countries that do not have a strong electricity grid with a steadier energy supply, including for larger markets such as India and Australia, where Siemens Gamesa also operates large hybrid plants. Indeed, many in the industry believe that the growth of renewable energy as a percentage of a country’s energy production means that operators will increasingly demand more than just having a wind or solar power plant, and that could lead to steady growth in hybrid systems.

“The penetration of renewable energy in today’s electricity systems, falling green energy costs and a drive towards decarbonization mean that operators want more than just a wind farm. I believe that in 3-5 years many of the wind plants we construct will be proposed with some sort of hybrid solution attached,” said Juan Diego Díaz Vega, Onshore Marketing Director at Siemens Gamesa. Batteries blossoming And while not a fully-fledged hybrid species, a surging market is also being seen for storage. Such ‘stand-alone’ facilities provide a large-scale battery and aim to provide stability to an electricity grid, reacting to release energy in a very short space of time when demand surges. This market is of particular relevance in the U.S. but is also growing across the world as the growth of storage solutions escalates rapidly. Indeed, the U.S. storage market is set to grow by over 4.5 GW a year by 2024 according to energy consultancy Wood Mackenzie, as States across the country seek to increase the performance of the electricity grid while creating both value for utilities and customers.

Such facilities can prove attractive to energy operators as not only can they provide some stability in moments of stress on the grid, such as a power outage, but they can also be profitable as they store energy in the day when it is more valuable.

Storage facilities may well be of interest for the company in the not too distant future. What is certain is that what started in the Galapagos has led to a steady evolution at Siemens Gamesa, adapting to form new hybrid species and storage solutions as energy markets evolve and demand more from renewables. As renewables continue to grow and form an increasing percentage of the electricity , we use then more hybrid species will surely adapt to help us deliver clean energy to more and more people.