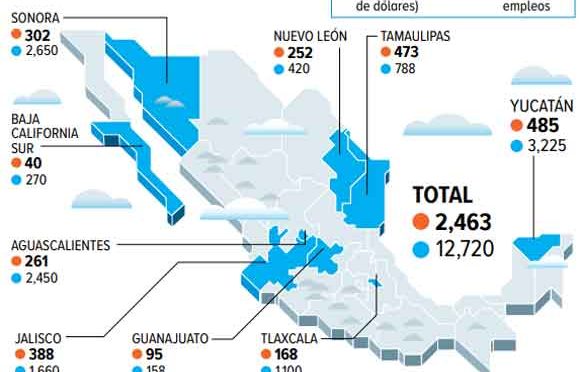 The policy of electricity generation of the Government of Mexico goes against the commitments assumed by the State in the Paris Agreement, for the reduction of greenhouse gases, and closes the path to renewable energies favoring the burning of fuel oil, he said a Greenpeace expert.

Pablo Ramírez, specialist in energy and climate change at the international environmental organization, explains in an interview to Sputnik that the restrictions imposed on the operation of wind power and photovoltaic energy generating companies “hinder performance and block the path to renewable energy.”

Through two legal instruments, one issued on April 29 by the National Center for Energy Control (Cenace), and an executive agreement of the federal Secretary of Energy, on Friday May 15, “a policy of energy generation is drawn up that is a public policy of impediment for renewable energies “, with wind turbines and sunlight.

The decision, which has been presented with technological nuances, arguing the need to protect the electrical system against low demand, due to the closings of work and educational activities in the face of the COVID-19 pandemic, “is a fairly political decision, which does not pass a lot because of the technical issue, “argues the environmentalist.

The energy sector remained closed as a monopoly for eight decades, after the expropriation of oil companies that gave birth in 1938 to the state-owned Petróleos Mexicanos (Pemex), which was a monopoly together with the Federal Electricity Commission (CFE).

“Two state monopolies, Pemex and CFE in the generation of electricity, remained closed” despite the economic reforms that opened this country to free trade with North America, 26 years ago.

Mexico shuts down investment in renewable energy, but “competition is not going to give it a break”
The current ruling party, founded by President Andrés Manuel López Obrador, the National Regeneration Movement (Morena) “was completely excluded from the discussion, with a very strong nationalist ideological base, with the intention of rescuing sectors of the State on strategic issues”, explains the activist.

The problem with this decision is that it “puts at risk the fulfillment of international commitments”, ratified by Mexico in Paris in 2015.

This pact within the United Nations establishes measures to reduce greenhouse gas emissions through the mitigation, adaptation and resilience of ecosystems, in the face of the effects of global warming, starting in 2020.

López Obrador has decided on a plan to abolish oil exports, and expand crude oil refining capacity with a new refinery that will cost 8,000 million dollars, to eliminate imports of 70% of gasoline.

Ramírez explains that “the national refining system is very inefficient: for every barrel of oil processed, 30% is generated in waste that is fuel oil.”

The sun rises for Latin America: photovoltaic solar energy is an opportunity for the region
Although technologically the reconfiguration of the refining system is under discussion, “much of the fuel oil that is no longer used anywhere in the world, will go to CFE electric power plants,” says the ecologist.

Fuel oil is waste that was previously sold to old ships.

The person in charge of Greepeace warns, however, that earlier this year, “a maritime regulation prohibited the use of fuel oil, as it has high concentrations of sulfur,” leaving the Mexican state in a great dilemma.

This fuel, the result of the residues of the refining of crude oil “has been used as fuel for thermoelectric plants, but it is highly polluting, and very inefficient in terms of low caloric capacity, has been in disuse for several years,” the expert continues.

At this point, the decision to increase oil exploitation in fossil deposits is intertwined, with the intention of halting renewables and converging with the generation of electricity with fuel oil.

Mexico is the second country with the lowest proportion of renewable energy in its electrical matrix, only after Barbados, according to the United Nations.

And he clarifies: “We have no particular interest, no matter how renewable energy is generated, whether it is public or private.”

But he regrets that the Government “promotes all investment opportunities in fossil [hydrocarbon] projects instead of investing in renewables”, in light of the right to health, a healthy environment and sustainable development.