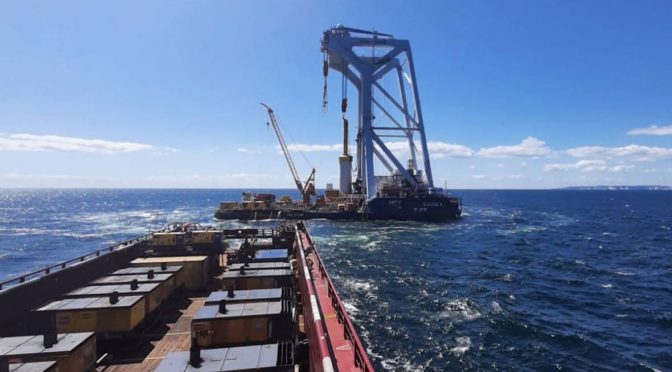 The first foundation for Kriegers Flak Offshore Wind Farm has been successfully placed in the Baltic Sea well on schedule to contribute to Vattenfall’s goal of enabling fossil-free living within one generation.

The first foundation for Vattenfall’s Kriegers Flak Offshore Wind Farm, 15-40 kilometres off the coast of Denmark, has been placed in the sea bed of the Baltic Sea.

On the foundations, 72 turbines will be mounted to create Denmark’s largest offshore wind farm with a capacity to cover the annual electricity consumption of approximately 600,000 Danish households.

“The foundation represents the first visual offshore part of the wind farm itself. It’s a milestone in the development of this great project and Vattenfall’s journey towards enabling fossil-free living”, says Catrin Jung, Head of Offshore Wind, Vattenfall.

Installation of the foundations is expected to run into the autumn this year with installation of turbines starting in 2021. Despite restrictions following the COVID-19 pandemic, the development of Kriegers Flak is on schedule to be in full operation by the end of 2021, at the latest.

Kriegers Flak is the latest and largest of Vattenfall’s recent offshore projects in Denmark. The others being Horns Rev 3, which was inaugurated last year, and Vesterhav Syd & Nord, which are scheduled to be in full operation by the end of 2023, at latest.

During pile driving, a double curtain of bubbles will be deployed around each foundation to mitigate noise as a safeguard for marine mammals.

The so-called monopile foundations have been manufactured by EEW-SPC in Rostock. On top of the foundations, transition pieces from Bladt Industries will be mounted to carry the 8.4 MW Siemens Gamesa wind turbines. The foundations will be transported and installed by Van Oord.

With a production capacity of just over 600 MW, Kriegers Flak will be Denmark’s largest offshore wind farm.
The offshore wind farm’s production can cover the annual electricity consumption in 600,000 Danish households.
The 72 wind turbines have a total height of 188 metres and each monopile foundation weighs up to 800 tonnes
The wind farm is located in the Baltic Sea, 15-40 kilometres off the Danish coast.