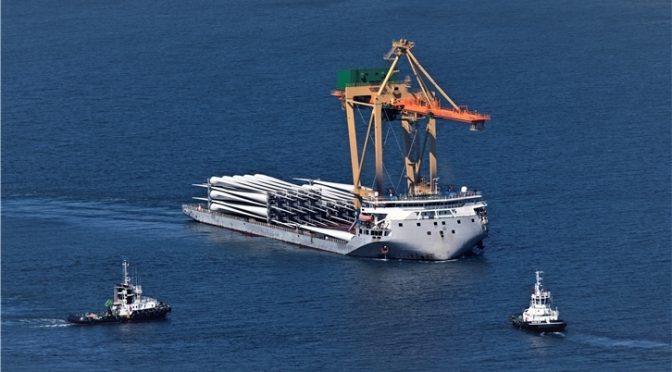 Blades have arrived at the port of Bilbao in Spain for Siemens Gamesa wind turbines that will feature at Iberdrola’s Puylobo wind farm in the Aragon region of the country.

The 42 blades that will be part of 14 3.4-132 machines were manufactured by Siemens Gamesa in China and travelled 20,000km by sea, after passing health checks and the Zhi Xian Zhi Xing docks.

The 64.5-metre long structures will be assembled with other components – towers, nacelles/hubs, generators, gearboxes and transformers – that are being manufactured at facilities in Asturias, Cantabria, Soria and Burgos.

Civil engineering work on the wind farm, which is located in the municipalities of Borja and Mallen in Zaragoza, is being completed by Iberdrola and local contractors.

Iberdrola is investing €50m in the wind power project, which will see more than 120 people involved in its construction.

Puylobo is expected online at the end of the year.

It is one of 12 renewable energy projects that Iberdrola is currently building in Spain and is part of the investment plan activated by the company, which envisages the installation of 3GW of wind and solar power by 2022.

Iberdrola said that it had advanced orders to suppliers for almost €4bn in the first quarter of the year – 75% of them in March.

About 24% of the orders were placed with companies in Spain, worth more than €940m, it added.