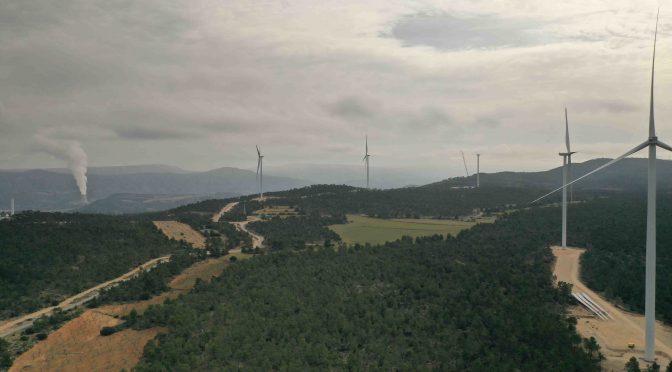 The wind power plant is located in the municipality of Cofrentes and has involved an investment of 53 million euros.
The new wind installation will generate a power equivalent to the electricity consumption of 43,000 families in one year
Elecnor, through its wind energy development and exploitation subsidiary Enerfin, has just launched the Cofrentes Wind Farm, the first such facility to be opened in the Valencian Community since 2012.
Enerfín obtained financing for this project from Banco Sabadell under the “Project Finance” modality. The construction of this park has involved an investment of 53 million euros.
13 General Electric wind turbines of 3.83 megawatts (MW) have been installed for a total power of 50 MW. The new wind farm will generate an annual production of 155,000 MWh of electrical energy, equivalent to the electricity consumption of 43,000 families, and will avoid the emission of 66,000 tons of CO2 into the atmosphere.
Enerfin was awarded this project within the framework of the Valencian Community Wind Plan. The Elecnor Group has carried out the construction of the civil works as well as the electrical infrastructure of the park up to the point of evacuation, which will be carried out in the Cofrentes Substation, owned by Iberdrola. During its construction, some 300 direct jobs and more than 600 indirect jobs have been generated.
The excellent work carried out in coordination with all the companies involved in the last phase of the project (GE, Iberdrola, Elecnor and Enerfin) and together with the support received from the Generalitat Valencia, have made it possible for the wind farm to have been put into March on the scheduled date, despite the difficulties involved in the Alarm State generated by the COVID-19 pandemic.
The operation of the Cofrentes Wind Farm will allow the Valencian Community to enter
annually about 400,000 euros from taxes and contributions to the Fund
Wind Plan Compensation.
Elecnor is one of the leading Spanish business groups in the infrastructure, renewable energy and telecommunications sectors. With 60 years of continuous growth and present in 55 countries,
focuses its activity on different sectors ranging from electricity, gas, industrial plants,
railways, telecommunications, water, control systems, construction, environment,
maintenance of facilities, up to aerospace engineering.