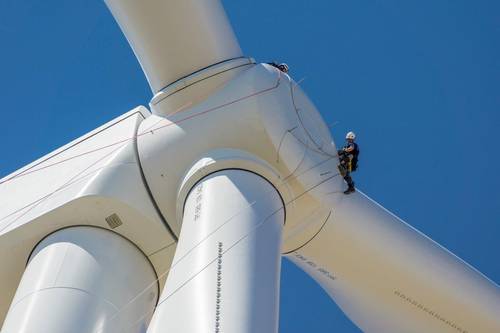 Nordex has received another order for its new Delta4000 wind turbines, with their 5MW+ rated power, in Norway.
The manufacturer will supply nine N149/5.X wind turbines for the “Lutelandet” wind farm.
The wind poert project was developed by Vestavind Kraft and is owned by Lutelandet Energipark AS, a daughter of the Norwegian municipal utility, SFE Produksjon AS; with its main business area in power generation.
The order also includes a Premium Service contract with a production-based availability warranty. The term of the Service contract is five years, with the option to extend the agreement on the same terms and conditions for up to four additional periods of five years.
The 51 MW wind farm will be built on the Island of Lutelandet, approximately 100 km north of the city of Bergen, in South-west Norway. With a hub height of 105 meters, the wind turbines will take advantage of the local steady medium wind speeds, which hail from the west coast and tend to average around 7.4 m/s. Installation of the first turbines is scheduled for mid-2021, and after completion at the end of that year, Lutelandet will generate 150 GWh clean electricity per year.
“We are pleased to have SFE Produksjon AS as a new customer. This highlights the fact that the Nordex Group once again is the first choice among many energy suppliers and municipal utilities,” says Patxi Landa CSO of the Nordex Group.
Sogn og Fjordane Energi is one of the largest energy companies in the Vestland region. The company includes three subsidiaries and has a total of 250 employees. In 2018, the annual revenue was NOK 1 681 mill. SFE Produksjon is the production subsidiary with an energy production of 2 TWh. They are currently constructing two additional hydropower projects as well as two wind power plants.