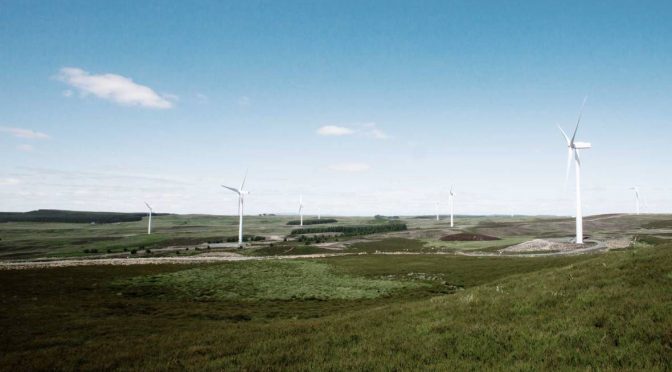 The U.K. lifted a ban subsidies for new onshore wind power plants years of denying technology support, a sign ministers are looking for more ways to meet a goal of net zero emissions by 2050.

The capacity of new wind farms sited on land slumped to the lowest levels since 2015 last year after policies to curb the industry took hold. The Conservative administration has long been concerned about the visual impact of wind turbines in rural areas, where its voter support is strongest.

The move means developers will be allowed to enter more wind farm projects into future auctions for contracts-for-difference, which guarantee a price for power from the facilities.

“Ending our contribution to climate change means making the UK a world leader in renewable energy,” Alok Sharma, the cabinet minister in charge of business and energy, said in a statement in London on Monday.

The U.K. government halted subsidies for onshore wind energy four years ago after residents in rural areas expressed concern that more installations were blighting the visual appeal of the countryside. That ran against the grain of efforts to rein in fossil fuel emissions, with wind advocates noting turbines are one of the cheapest forms of renewable energy.

The policy is set to be challenged in the U.K. High Court Wednesday by developer Banks Renewables which says that the current subsidy mechanism discriminates against onshore wind and other renewable technologies in favor of offshore wind.

The government will consult on the structure of the next round of contracts for difference and confirmed that onshore wind and solar projects from 2021 will be able to take part for the first time since 2015.

The program will also be changed to accommodate bids from energy storage projects and floating wind farms.

The move will add to the 20,600 jobs already linked to renewables.

“Backing cheap renewables is a clear example of the practical action to tackle climate change that the public is demanding, and this will speed up the transition to a net zero economy,” said Hugh McNeal, CEO of the industry group RenewableUK.

Just 23 onshore wind farms with a total capacity of 629 megawatts started producing energy across Britain in 2019. That was down from 2018’s result and far below the 2,600 megawatts installed in 2017, according to data from industry association RenewableUK. The U.K has about 13.5 gigawatts of operational onshore capacity currently.

The reversal comes ahead of next week’s budget. The Treasury is widely expected to include policies aimed at achieving the net zero goal. Since the U.K. enshrined the target into law, the government has pledged to support the battery battery, hydrogen and carbon-capture technologies.

“This is a real breakthrough for the clean energy market in the U.K.,” said Tanya Steele, chief executive officer of the U.K. unit of the environmental group WWF. She said it will bring “green jobs in the places that need them most as well as cleaner air and lower emissions.”