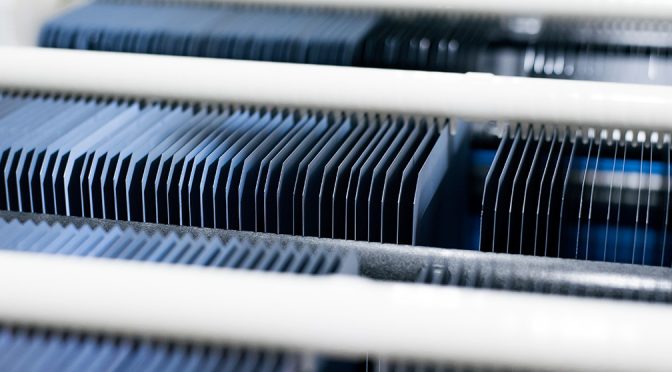 Our search for a more efficient solar panel has made significant progress. The heterojunction solar cells produced by Enel Green Power have broken the world record for efficiency, converting 24.63%. The results were certified by the ISFH, Germany’s Institute for Solar Energy Research in Hamelin.

The record was achieved thanks to a combination of busbarless technology, which enables cells to convert more light, and a new treatment developed with (Institut National de l’Énergie Solaire) INES, which enhances cell surface passivation.

Double-faced cell efficiency was increased by approximately 0.7% thanks to enhanced processes of layer deposition and screen metallization based on heterojunction processes (HJT) using Meyer Burger equipment.

“We’ve graduated from the testing phase and we’ve shown that we know how to make double-faced solar cells that convert 24.63% of light. Such results have never been achieved before using processes and materials that can be industrialized. We’re ready to make this process scalable at an industrial level and stake our claim as leaders in cutting-edge solar panel production.”

The Italian plant in question is a leader in the photovoltaic field. For the moment, it is the first and only plant in the world to produce double-faced HJT modules (amorphous crystalline silicon) on an industrial scale. This new record could provide a further boost.

Currently, the modules convert light into electricity with over 20.5 percent efficiency and every unit boasts 400W of nominal power, but that’s not all. The double-face captures light on the back side as well, thereby producing a greater quantity of electricity; nearly 30 percent more than traditional single-faced panels.

The next objective for our researchers at the plant in Catania (EGP’s pride and joy and one of the largest photovoltaic production plants in Europe) is to achieve over 25% light conversion efficiency with over 500W of power.