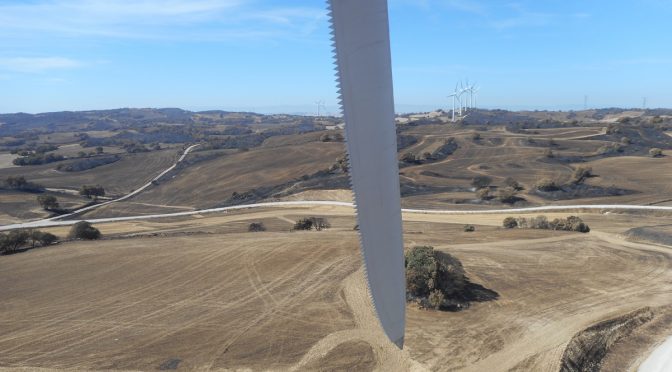 Elena Llorente Trujillo has investigated in her doctoral thesis, read at UPNA, the effect produced by adding this type of elements to wind turbines.

Elena Llorente Trujillo has investigated in her doctoral thesis how the installation of serrated teeth on the trailing edge of the blades influences the aerodynamic performance of wind turbines. “These devices and their effectiveness in noise reduction have been extensively studied,” he says, “but to date there was no analysis of the effect that these solutions had on the operation of wind turbines.” His doctoral thesis has obtained an outstanding grade. and has been directed by the professor of the Department of Sciences of the UPNA, Miguel Arana Burgui and by the professor of the Department of Aerodynamics, Wind Energy and Propulsion of the Technical University of Delft, Daniele Ragni.

According to the author of the thesis, there is a continuous and stable increase in wind power throughout the world, which implies the installation of wind farm in areas closer to urban centers and that the size of the rotors is also much larger. “These two factors mean that the noise emitted by the wind turbine can become a cause for complaint if certain levels are exceeded.” To avoid this, the industry has proposed different solutions that reduce the level of the emitted sound power; among them, the installation of serrated teeth at the trailing edge of the blades.


In his thesis “Trailing edge serrations effect on the aerodynamic performance of wind turbines” he has analyzed the impact that serrated teeth have on the aerodynamic behavior of the wind turbine. First, he carried out different theoretical analyzes of the problem and simulations of 2D and 3D geometries of the air flow around a profile with serrated teeth, a profile with a flat plate and the profile without any device installed. This allowed comparing and analyzing aerodynamic coefficients, speed profiles, turbulence, wake modification, etc. “In that theoretical study – he points out – the impact of the angle of assembly of the sawed teeth on the blade and the influence of the thickness of these devices on the aerodynamic behavior of the profile are also investigated.”
Satisfactory results

One of the most important results of the theoretical study has been the derivation of an empirical law that predicts the coefficient of support of the profile with serrated teeth from the data of the original profile. To validate this prediction law, an experimental campaign was carried out in the LTT wind tunnel of the Technical University of Delft (Netherlands).

In the experimental results it was observed how the presence of serrated teeth in the profile causes an increase in the lift and resistance coefficients and that these coefficients increase according to the mounting angle. “These data have been compared with the data calculated from the proposed law and a good adjustment between both results has been observed.”

The next step was to use that law to extend the theoretical analysis to the complete wind turbine, with serrated teeth installed in its blades, “and an increase in both production and loads was confirmed.” Finally, to validate the theoretical production data, an experimental campaign was carried out on a real wind turbine with serrated teeth installed and “a significantly higher production increase was seen in the real case, compared to the theoretically calculated”. In the same way, an experimental study of the acoustic impact of the aforementioned devices on the noise emitted by the wind turbine was carried out and a reduction of the acoustic power above 2dBA was verified ”.
Curriculum vitae

Elena Llorente is an Industrial Engineer from the Carlos III University of Madrid, specializing in Energy Technologies. He has worked in companies linked to the field of renewable energy first in Siemens Gamesa where he developed his professional activity in the field of aerodynamics and aeroacoustics as responsible for blades, developing strategies for reducing loads and increasing production as well as strategies for reducing noise emitted by wind turbines.

He currently works at Nordex Energy Spain, where he holds the position of head of aerodynamics in the area of ??blades, coordinates the projects of aerodynamic design of blades, performs work on analysis of wind turbine noise reduction devices and tests of aerodynamic profiles in tunnel wind. She is an expert in noise emitted by wind turbines, a field in which she has presented her doctoral thesis.