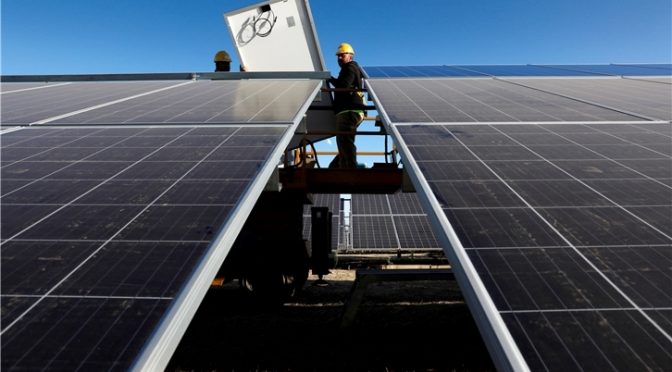 The energy that Iberdrola will supply to Orange, through this long-term power purchase agreement (PPA), will come from a new solar photovoltaic project that will be built in Extremadura.

Iberdrola and Orange have decided to ally themselves in terms of sustainability, with a long-term power purchase agreement (PPA), which will allow the telecommunications operator to continue with its commitment to consuming emissions-free energy in this country, which it already demonstrates as it uses energy from 100% renewable sources at all its locations.

The terms of the agreement reached between the two companies establish that Iberdrola will provide green energy to the 9,000 supply points in Orange’s own network in Spain, for a period of 12 years. The contract is now in place and half of the consumption – 200 GWh/year – to be supplied under the PPA formula will be associated with a new-build renewable asset, the Ceclavín photovoltaic project, which Iberdrola will develop in Extremadura during this year.

The plant will have an installed capacity of 328 MW and be located in the municipalities of Ceclavín and Alcántara, in the province of Cáceres, and will be Iberdrola’s third photovoltaic project in the region. It will become operational in 2020 and avoid the emission of 110,000 tonnes of CO2 a year.

Ceclavín forms part of Iberdrola’s strategy to invest in clean power generation projects in Spain – where it plans to install 3,000 MW by 2022 – and its commitment to using bilateral agreements with big customers who are committed to sustainable consumption as a way to promote the supply of energy at affordable, stable prices.

“PPAs open many opportunities to develop the renewable projects that are transforming the present and future energy in our country. These long-term energy purchase and sales contracts provide stability to the company’s investments and have also become an optimal tool for managing the electricity supply of large consumers who are committed to clean and sustainable consumption. In addition, these agreements demonstrate the competitiveness of renewables and their ability to supply energy at affordable and stable prices”, explains Iberdrola España CEO Ángeles Santamaría.

“This agreement with Iberdrola is in line with our commitment to caring for the planet and for sustainability that are set out in the Orange Group’s strategic plan, Engage 2025, of which Spain, as its second largest market, is a fundamental part. In addition, it reinforces our strategy as a group to achieve carbon emission neutrality by 2040, while also contributing to increasing the renewable energy capacity in Spain”, says Laurent Paillassot, CEO of Orange.

Together with its environmental impact, the construction of this new photovoltaic solar project will contribute to job creation and to boosting the industrial fabric of the local community. Its construction will represent an investment of some 250 million euros.

The Ceclavín photovoltaic project forms part of the company’s commitment to strengthening its investment in the production of clean energy in Spain, by installing 3,000 new MW by 2022. Up to 2030, the company forecasts it will install 10,000 new MW, which will create employment for 20,000 people.

In Spain, Iberdrola is the leader wind developer – with an installed capacity of more than 5,800 MW – and renewable energy leader, with 16,000 MW installed (over 30,300 MW worldwide), making its generation fleet one of the cleanest in the energy sector.

Iberdrola’s choice of a decarbonised economic model has entailed investments of almost €10bn euros a year around the world, having allocated almost €100bn in this area since 2001. Of these, 25 billion have been invested in Spain.

Iberdrola is a global reference point in the area of PPAs and has long-term power purchase agreements (PPAs) in markets that include Spain, United States and Mexico, with wind and photovoltaic power projects totalling over 1,500 MW. In Spain, the company has been a pioneer in promoting this type of agreement with companies from various sectors (banking, telecommunications, brewery distribution and sports brands).

For further details: What is a PPA and what are the main benefits?

Orange’s environmental policy, which is part of its strategic plan, Engage 2025, is based on 3 main cornerstones: reduce CO2 emissions, integrate the circular economy into its processes and activities, and use digital technology to boost energy efficiency.

One of Orange’s objectives, which are aligned with the SDGs, is to reduce the CO2 emissions from its activity to 0% by 2040, which requires that all the energy it consumes comes from renewable energies, as well as specific actions in energy efficiency.

In addition, Orange will expand its Green ITN programme to reduce the energy consumption of its network locations, multiply by 10 the number of electric vehicles in its fleet and integrate the circular economy into its business with measures such as green products, a second-hand equipment network and the sale of more second-hand devices in stores.

All its planned actions are measurable and accessible and managed in compliance with the ISO 14001:2015 Environmental Management System. They are audited and presented to international certification bodies that certify them and regularly award the Orange Group prizes.