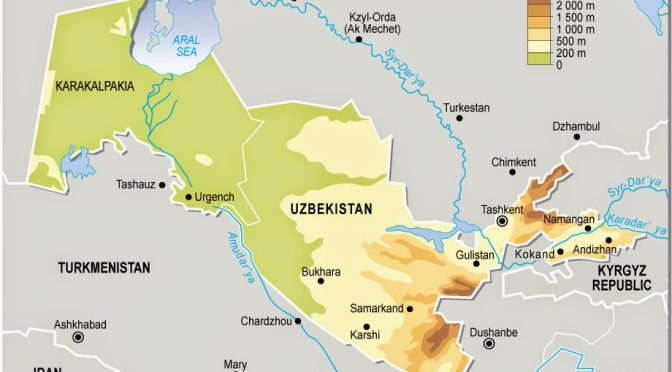 When Shavkat Mirziyoev came to power after President Islam Karimov’s death in 2016, he changed a lot of policies and put an emphasis on the development of the country’s renewable power resources.

Qishloq Ovozi has looked at Uzbekistan’s hydropower ambitions, which aim for water-generated power to account for nearly 16 percent of the country’s energy balance by 2030.

Uzbekistan is also planning to tap other renewable energy sources.

There were reports in September that Chinese company Lioaning Lide was building a wind farm in the Gijduvan district of Uzbekistan’s Bukhara Province that will produce some 200 MW by autumn 2020 and eventually some 1,500 MW when the project is complete.

In October 2019, the Uzbek Energy Ministry announced that U.A.E. firm Masdar was awarded a contract to build a solar park with 100 MW of capacity in Navoi Province, which is also part of the World Bank’s Scaling Solar program.

There is already a 130 MW solar park in Namangan Province, and French company Total Eren has built a 100 MW photovoltaic power station in the Nurabad district of Samarkand Province.

Uzbek Deputy Minister of Investment and Foreign Trade Shukhrat Vafaev said in October that the country would soon announce tenders for the construction of a solar park with a 400 MW capacity and another that could produce 500 MW annually.

In January, Viktor Vekselberg, the head of Russia’s Renova Group, met in Tashkent with Uzbek Energy Minister Alisher Sultanov and expressed his company’s interest in assisting to build solar parks in Uzbekistan. He also offered to form a joint venture to produce solar panels.

Uzbekistan is planning on increasing renewable energy resources so that they would make up 25 percent of the country’s total power needs by 2030.

Completion of just the wind farm and solar park projects listed above would give Uzbekistan more than 3,000 MW of additional energy, which helps power a country that the Energy Ministry forecasts will consume twice as much energy in 2030 as it currently does.