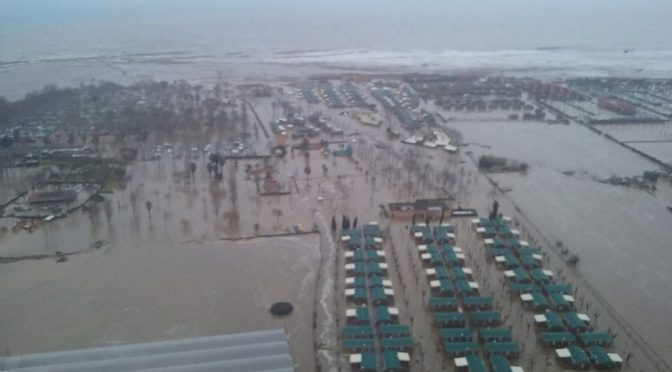 Rising sea levels, a direct impact of the Earth’s warming climate, is intensifying coastal flooding. The findings of a new study show that the projected negative economy-wide effects of coastal flooding are already significant until 2050, but are then predicted to increase substantially towards the end of the century if no further climate action on mitigation and adaptation is taken.

The Paris Agreement, adopted in 2015 by 175 parties, aims to limit global warming to well below 2°C compared to pre-industrial levels. However, the period 2010–2020 was the planet’s hottest decade on record and the long-term trend is upward. Sea level rise is one of the most severe impacts of climate change, with rising waters amplifying coastal floods, threatening coastal communities, infrastructure, and agriculture.

New IIASA-led research for the first time assessed the economy-wide effects of sea level rise globally and in particular in G20 countries when jointly taking into account different climate mitigation and adaptation assumptions, using three different macroeconomic models. In the study, authors compared two different climate policy scenarios – one achieving well below 2°C warming by the end of this century (basically in line with the Paris Agreement), and one overshooting this target – in combination with two different adaptation scenarios (no adaptation and full adaptation to sea level rise) and estimated GDP impacts due to coastal flooding in all scenario combinations for 2050 and 2100. The study is also innovative in terms of looking at G20 countries explicitly, that is, countries that are big emitters and at the same time affected by climate change. The analysis thus corroborates the need for action on both mitigation and adaptation.

“We found that up to 2050 the global GDP losses in both climate futures are significant and similar given the effects of climate change that we are already experiencing. However, by 2100, without further mitigation and adaptation and assuming continued sea level rise, projected annual global economy-wide losses can amount to more than 4%,” explains study lead author and IIASA Risk and Resilience Deputy Program Director Thomas Schinko. “With ambitious mitigation and adaptation, the model results show that this number can be reduced to below 0.5% of global GDP loss, despite the associated costs for adaptation measures and residual impacts. This confirms the importance and economic efficiency of adaptation in the long term: Making sure that coastal communities and their infrastructure are climate-resilient will affect economies across the globe much less than persistent climate impacts in the absence of climate action.”

According to study coauthor Laurent Drouet, a senior scientist at the RFF-CMCC European Institute on Economics and the Environment, in terms of regional effects across the G20, the highest levels of annual GDP impacts in relative terms are projected for China. In 2050 and with no further adaptation, economic losses amount to 0.8-1.0%. Estimated GDP losses for India are slightly smaller (0.5-0.6%), followed by Canada (0.3-0.4%). Zoi Vrontisi, a senior researcher at the E3MLab of the National Technical University of Athens, highlighted that until 2050 the direct economic losses of sea level rise on a global level can still be balanced out by interregional trade and substitution effects in production processes at the macroeconomic level. However, after 2050 and up to 2100, the scale of economy-wide effects in G20 countries changes drastically.

China remains the country with the highest projected relative GDP loss if no further adaptation is undertaken, which is now a factor of ten higher than it was in 2050: According to the economic modeling undertaken, annual losses would amount to 9–10% in a well below 2°C scenario, and to 11-12% under a current mitigation policy scenario. Other regions with severe economy-wide damages by 2100 under no adaptation are Europe and Japan.

Macroeconomic impacts are analogous to the direct damages of sea level rise. However, Andries Hof from PBL Netherlands Environmental Assessment Agency, notes that this changes if stronger mitigation actions are undertaken and sea level rise adaptation efforts are strengthened. Similar to the global picture, all individual G20 countries could thereby limit the residual economy-wide impacts to below 1.0% of GDP if appropriate adaptation measures are taken. An important benefit of further mitigation efforts to be undertaken by G20 countries are strong reductions of impacts for the most vulnerable coastal countries across the globe. This effect will be further investigated in future research.

“The findings of this paper demonstrate that we need to think long term while acting swiftly. Macroeconomic impacts up to and beyond 2050 as a result of coastal flooding due to sea level rise – not taking into account any other climate-related impacts, such as drought – are severe and increasing. We, as a global society, need to further coordinate mitigation, adaptation, and climate resilient development, and consider where we build cities and situate important infrastructure,” concludes Schinko.