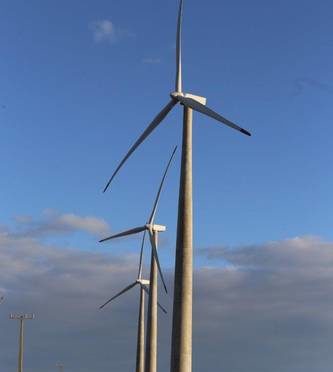 Ladakh, a Union Territory under the administrative control of the central government, has good wind resource due to its valley terrain and temporal variation with an estimated potential of 5,311 Megawatt at a hub height of 50 meter. The potential goes up to 100,000 Mw at a height of 120 Meter, Balaraman told wind energy stakeholders in a meeting earlier this month.

Hub height refers to the distance from the turbine platform to the rotor of an installed wind turbine and indicates how high the turbine stands above the ground, while not including the length of the turbine blades.

The meeting was held in Leh under the Chairmanship of Ministry of New and Renewable Energy (MNRE) Joint Secretary Bhanu Pratap Yadav to explore the possibilities of setting up Wind Power projects in Ladakh including setting up of wind masts for validation of wind resource and other issues.

Balaraman made a detailed presentation on the wind and solar resource assessment studies carried out by NIWE for Ladakh and Kargil and highlighted the site for the projects, Chushul in Ladakh, had shown great potential.

“The defence establishments at Kargil and Ladakh regions which are completely relying on diesel gensets for their energy demands may also explore the possibility of utilizing the wind or solar power for their needs,” Yadav said.

It was decided during the meeting that all the stakeholders will provide inputs to NIWE for finalizing the locations for installing met masts in the region. Also, a working group comprising NIWE, project developers and original equipment manufacturers will be formed to finalize the locations and decide upon the type of wind turbine generators to be deployed.

After the identification of potential locations NIWE and SECI will together plan the grid evacuation infrastructure development including logistics details in coordination with Border Roads Organization.