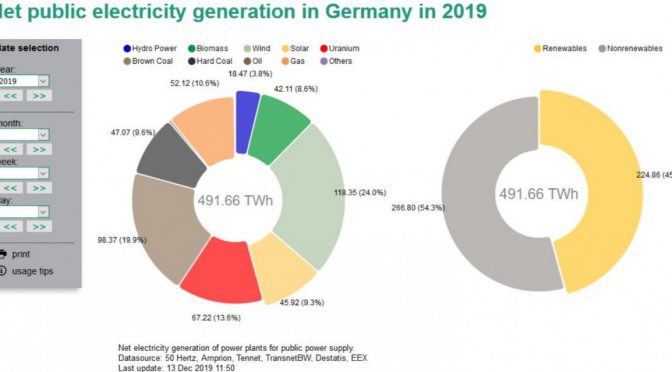 One of the biggest hopefuls of the energy revolution has been the wind energy industry. But now in Germany, it’s facing a major setback. First Senvion, and then Enercon have both folded. It’s a huge crisis for the German wind industry.

Hermann Albers, the president of the German Wind Energy Association (BWE), is quite conviced that the government has made a “fatal mistake” with the introduction of a minimum distance for wind turbines of 1,000 meters (1,093 yards) from residential areas. And German consultancy group Prognos believes that the German onshore wind power’s  “success story is currently in danger” amid growing pressure on the sector.

As the warning signs for the German wind power industry are flashing red, the recent meeting between industry and government officials at least created a “better understanding” of the problems BWE said, but key issues remain unresolved.

The share of renewable energy in Germany’s energy consumption reached a record of 43% in the first nine months of 2019, figures from utilities association BDEW and research foundation ZSW show.

But the headline figure conceals the fact that nationwide only 35 new windmills with a combined output of 290 megawatts (MW) were installed in the first half of 2019, down 80% from the same period of 2018 and the lowest in two decades. The last six onshore wind power auctions have also been undersubscribed. In September, bids were submitted for only 35% of the 500 megawatts (MW) on the block.  Watch video 01:23

Growth but not fast enough?

Marco Lange from Siemens Gamesa Renewable Energy says that the German wind energy market is “historically unique” because it is dominated by more small local project developers compared to other markets.

“With the change to the auction system many of those find it increasingly difficult to participate successfully in the market,” he told DW, which has increased the level of regulation and made permissions from authorities take too long.

“Moreover, often judicial action is taken against the permissions, for example by citizens who do not want turbines in their neighborhood or by environmental activists,” Lange says.

According to the government’s long-term plan, renewable energy will account for at least 65% of the country’s electricity needs by 2030. Wind energy has accounted for more than a quarter of electricity production so far this year and solar power just 10%. According to a recent study by the Agora Energiewende pressure group, about three-quarters of the additional capacity needed by 2030 will have to come from wind.

Some 27% of jobs in Germany’s wind industry could be lost by 2030 because of a stagnating expansion of onshore wind turbines, according to a study published by VDMA Power Systems. It has estimated that job losses by the end of 2019 will have jumped to 40,000. If problems with the approval of new wind plants continue, the decline in domestic business would reduce annual gross value added in Germany by €700 million ($776.4 million), VDMA says.

Half of Europe’s 300,000 wind energy jobs are in Germany. Enercon, one of the largest German manufacturers of wind turbines, recently cut 3,000 jobs, while the turbine installation slump has also hit rival manufacturers, such as Vestas and Siemens Gamesa.

Just 400 MW of new wind farm permits were awarded in the first quarter of this year, well below historical levels. There are also around 11 GW of wind farm projects stuck in the permitting process in Germany. That’s roughly equivalent to the entire installed wind capacity of Denmark and the Netherlands combined.

According to Canning, the permitting process for new wind farms was the “underlying problem,” which has led to permissions that used to take just 10 months now taking over two years. “Plus there is a lack of staff to process the applications, especially at the Bundesland level,” he says.

Delays and legal disputes have increased commercial risks for the industry, as they are scaring off potential investors. This is already showing in the number of wind power projects tendered this year. Of the more than 1,350 MW offered by the government so far in 2019, only 746 MW materialized due to a lack of participation in the public auction rounds.

“Economically and technologically, this is totally misguided,” Lange says. “We see already an ongoing decline of companies being active in the wind industry. This has an effect on the value chain in the country up to reduction of local production of key components.”

Josko Radeljic, head of investor relations at the Baywa consultancy, believes that the government must act forcefully now to ensure that “public acceptance of wind power remains high in general.” Government measures to increase offshore wind energy production, and plans to improve benefit schemes for local communities from wind profits are going “in the right direction, he says, just to add: “In sum [they are] not ambitious enough to address the situation.”