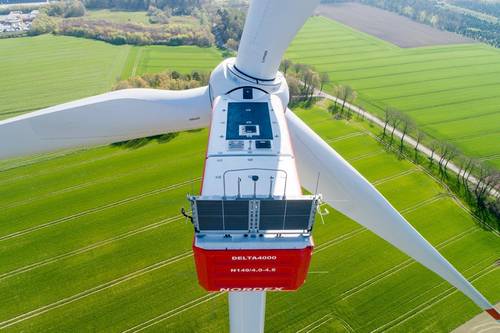 The Nordex Group (ISIN: DE000A0D6554) today announced that it generated consolidated sales of EUR 1,943.0 million in the first nine months of 2019 (9M 2018: EUR 1,772.9 million). As expected, the third quarter contributed significantly to this sales increase with sales of EUR 952.2 million (9M/2018: EUR 815.7 million). Gross revenue rose by 43.7 percent from EUR 1,753.3 million to EUR 2,519.7 million. This figure also includes services provided but not yet shown as sales, such as turbines manufactured. Earnings before interest, taxes, depreciation and amortization (EBITDA) amounted to EUR 60.2 million (9M 2018: EUR 71.4 million), corresponding to an EBITDA margin of 3.1 percent (9M 2018: 4.0 percent). This means that the Nordex Group’s business performed in line with expectations in the first nine months of the year, with the third quarter proving to be much stronger than the previous two quarters as expected. The Company anticipates a further increase in business development in the fourth quarter and thus confirms its guidance for 2019. It expects consolidated sales of EUR 3.2 to 3.5 billion, an EBITDA margin of 3.0 to 5.0 percent, investments of around EUR 160 million and a working capital ratio as a percentage of consolidated sales of under 2 percent.

The Nordex Group increased its investments from EUR 60.4 million in the previous year to EUR 100.9 million. At EUR 80.9 million, the majority of this investment is attributable to additional production capacity, particularly for rotor blades. These investments are the result of persistently strong momentum in orders for the new Delta4000 platform and should support profitable growth in 2020 and beyond.

Key financial figures at a glance

At the start of the fourth quarter, Nordex SE carried out a 10 percent capital increase via a direct placement with its anchor shareholder Acciona S.A. As the Company received the gross issuing proceeds in the amount of around EUR 99 million in the fourth quarter, these proceeds are not included in the quarterly figures as of 30 September.

José Luis Blanco, Chief Executive Officer (CEO) of the Nordex Group, said: “The Nordex Group’s business is performing in line with our expectations in 2019, with a significantly stronger second half of the year. In light of this, we are confirming our guidance for the current financial year. Demand for our new Delta4000 product range remains very strong. It is now important for us to process a high number of projects efficiently while at the same time pushing ahead with the transformation of our supply chain.”