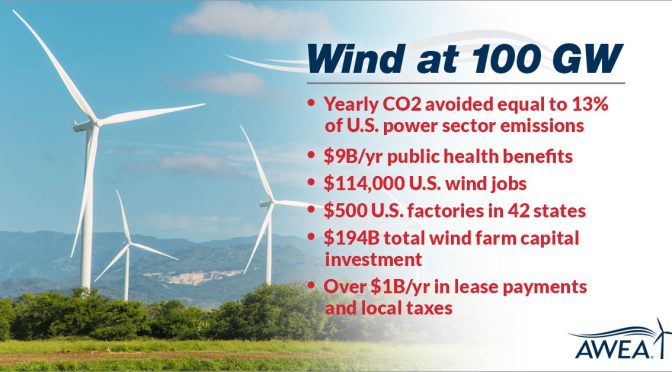 U.S. wind power has just achieved a major milestone: 100 gigawatts (GW) of installed capacity. American innovation, a pioneering spirit, and the hard work of the country’s 114,000 wind workers made this progress possible. Let’s take a moment to reflect on how we got here, and what this has meant for the country.

The American wind industry was born in the 1980s when the first utility-scale wind farms were installed in California. Wind energy started to spread to other parts of the country in the 1990s as wind farms popped up in parts of the Plains and Midwest. Once a nascent, emerging technology, the industry took off more rapidly in the 2000s as technology evolved. Wind farms spread to more parts of the country, from the Northwest to the MidAtlantic and the Northeast. By 2008 the United States had 25,000 MW (25 GW) of wind power across 35 states, and the industry grew quickly in the years since. While it took 28 years to build the first 25 GW of wind power, it only took 11 years to build the next 75. On top of that, the pipeline of new wind projects is now at a record high of 46.5 GW.

But the 100 GW milestone isn’t just a progress marker. It also represents the variety of tremendously important impacts that have come along with it: investment in rural America; job creation; domestic manufacturing; clean and affordable power; and health-saving environmental benefits. Reaching 100 GW is also a sign of the monumental clean energy transition currently underway in the U.S. as we transition to a modern, clean, and flexible electricity grid. Most importantly, it demonstrates how American ingenuity and our entrepreneurial spirit is creating an era of American energy dominance.

How can we put 100 GW into context? A few examples can help: 100 GW of wind power can generate enough electricity to match California (the world’s fourth largest economy) and New Jersey’s total annual electricity usage each year.

U.S. wind farms are delivering clean energy to electricity customers across the country. At full productivity, 100 GW of wind is expected to generate over 330,000 gigawatt-hours of electricity, making wind the single largest source of renewable electricity generation in the country, surpassing hydro. In other words, it means wind turbines across the country can generate enough electricity to power 32 million American homes or supply roughly 8% of America’s electricity.

Thanks to innovation achieved through the deployment of 100 GW, wind power is now the lowest cost source of new electric power in most parts of the country, even when ignoring incentives. Furthermore, wind is even becoming cost-competitive with many existing power plants. That’s because wind’s costs have fallen 69 percent since 2009, leading utilities and corporate customers to choose wind over many other energy sources to power their businesses. Looking forward, wind’s increasing competitiveness highlights its importance in driving the modernization of our electricity grid.

Over 99 percent of wind projects are located in rural areas, and they bring nearly unmatched economic development opportunities. Today, there are more than 1,100 wind farms operating in 41 states and two U.S. territories. These projects represent over $194 billion in capital investment and are a source of economic growth throughout the country. Importantly, investment in local communities doesn’t stop once the project is built. Every year the industry contributes more than a billion dollars in land lease payments and state and local tax payments across the U.S. These funds are a drought proof, cash crop for farmers and ranchers and can often make the different in keeping local schools open.

Manufacturing the 8,000 components in a modern wind turbine and building, operating, and maintaining the more than 57,000 wind turbines across the country is no small feat. The large scale of many wind components and the size of the U.S. market has attracted over 500 wind-related manufacturing facilities in the U.S. and directly employs over 24,000 Americans. Meanwhile, wind turbine technician is the country’s second fastest growing job according to the U.S. Bureau of Labor Statistics, and the profession will continue growing as more wind turbines are installed. In total, today, there are over 114,000 Americans across all 50 states working directly in the U.S. wind industry.

Wind power has some of the lowest environmental impacts of any source of electricity generation. Wind energy does not burn fuel to generate electricity and, as a result, does not emit any air pollutants such as carbon dioxide, sulfur dioxide, nitrogen oxides, or particulate matter. And by replacing more expensive, dirtier power plants, wind helps lower greenhouse gas emissions and reduce health care costs associated with air pollution.

The 100 GW of wind power operating on the grid will avoid over 240 million metric tons of CO2 annually—equal to 13 percent of U.S. power sector emissions. Every year wind avoids 43 million cars’ worth of carbon pollution. Without this extra air pollution, including the sulfur dioxide, nitrogen oxides, and particulate matter that can trigger asthma attacks and create smog, wind avoids health impacts to the tune of $9 billion annually.

And there is more to come

This is an historic time for American wind power. Not only has the industry achieved a milestone in deploying 100 GW, we have never been busier. Thanks to your hard work, more new wind projects are under construction or in advanced development than ever before.  A record 46.5 GW are in the pipeline. When we finish constructing all these new projects, the U.S. will have enough installed wind capacity to power 45 million American homes.

Wind is growing in new frontiers as well. We have the potential to harness a new ocean energy resource in rapidly emerging offshore wind with a pipeline exceeding 26,000 megawatts. Realizing this potential will create a new domestic supply chain potentially worth $70 billion, generate up to 36,000 jobs over the next decade, and revitalize port communities. The same American ingenuity that grew onshore wind will help offshore thrive.

We have hard work ahead of us to keep this momentum going, but our industry has a long track record of beating growth projections and driving down costs faster than analysts predict. We don’t expect this trend will stop any time soon.