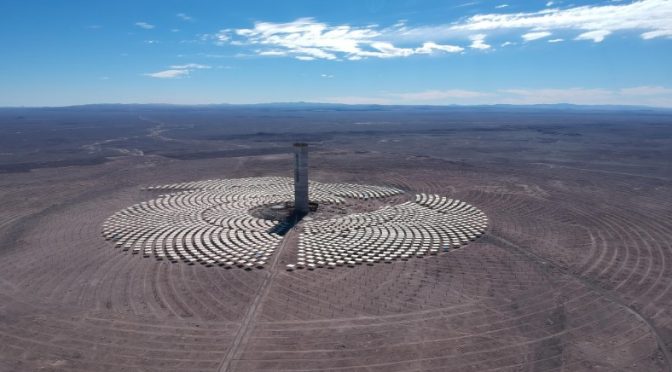 After a troubled start, Latin America’s first utility-scale Concentrating Solar Power plant is now in the final stages of construction.

Located in Chile’s Atacama desert, the 110 MW Cerro Dominador solar thermal tower plant features a record 17.5 hours of molten salt thermal energy storage capacity. The project will be joined to an operational 100 MW PV plant at a total cost of $1.3 billion. The combined facility will be capable of supplying power 24 hours a day, mainly to serve mining facilities.

Cerro Dominador forms part of Chile’s plan to generate 60% of its energy from renewable sources by 2035. The project was awarded a 15-year power purchase agreement (PPA) in 2014 at a price of $114/MWh.

Owned by funds managed by EIG Global Energy Partners, Cerro Dominador is being built by an EPC consortium owned by Acciona (51%) and technology supplier Abengoa (49%).

In July 2018, Acciona and Abengoa resumed construction of the plant following a two-year stoppage. The project was halted in 2016 when Abengoa, originally co-owner of the project and EPC supplier, underwent financial restructuring and transferred its stake to EIG.

Over the last year, the EPC partners have overcome project restructuring and supply chain reactivation challenges and the project is on target to achieve commercial operations by May 2020, Vizcaino told New Energy Update.

“Commissioning activities are set to commence by close-2019,” he said.

“We are conducting DNI measurements, environmental studies and talking with the relevant authorities and communities,” he said.

Almost two years after taking control of Cerro Dominador, Washington-based EIG signed a signed a $758 million financing deal in May 2018 with a group of Chilean and international banks.

The financing deal allowed Acciona and Abengoa to restart construction in July 2018 under a new joint EPC group, in which Acciona is leading construction and Abengoa acting as technology partner.

“Reactivating the project has been the biggest development challenge,” Vizcaino said.

The new EPC partners had to gain the backing of the new group of investment partners, he noted.

The partners also had to regain the faith of contractors and suppliers after a two-year gap in works, Vizcaino said.

«The new EPC contractor had to work very hard to give them the confidence to come back into the project at the same conditions as originally contracted,” he said.

The suspension also halted stockpiling of materials and equipment, creating additional logistical supply chain challenges for components such as turbines and receiver materials.

The Acciona-Abengoa consortium has employed around 1,000 construction workers for the project.

“Chile is very strict with the working shifts and labour conditions, which is necessary to protect our labour interest,” Vizcaino said. “However, it requires higher management standards and planning skills from the EPC Contractor.”

There is currently around 3.3 GW of active CSP projects in Chile but most of these projects stalled in early development and Cerro Dominador 1 is the only project to have reached financial closure, data from New Energy Update’s CSP Global Tracker shows.

Since Cerro Dominador, CSP developers have not managed to acquire sufficient power purchase agreements (PPAs) to back the financing of their projects.

Chile has implemented competitive power generation tenders, pitching competing renewable and gas-fired technologies against each other.

Global CSP prices have fallen dramatically in recent years but remain above the price of PV and wind projects.

According to Vizcaino, wind power is the «nearest competitor» to CSP in the renewable energy space, because of its capacity to generate at night.

«But it cannot be compared against CSP versatility, assuring constant and sustainable electricity supply,» he said.

“We have the best solar resources in the world,» Vizcaino said. «And a flat energy demand curve because of the 24-hour requirements from the mining industry, which CSP can meet through thermal storage,” Vizcaino said.