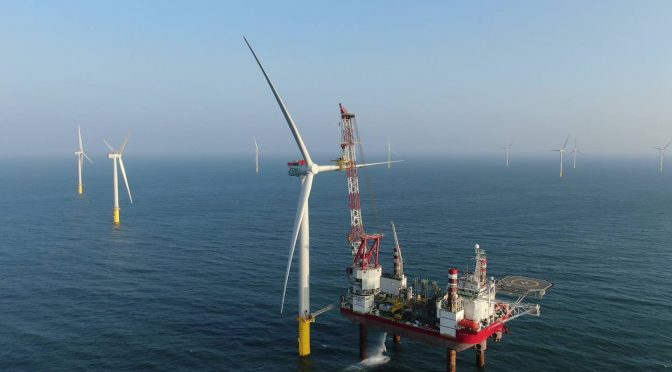 A company official said that 20 phase 2 wind turbines off the Miaoli County coast have been completed and operations would start before 2020.
Formosa 1, Taiwan’s first offshore wind farm, is to begin commercial operations by the end of this year, according to Swancor Holding Co, one of the shareholders of the project.

Swancor chairman Robert Tsai said that the phase 2 installation of 20 wind turbines about 6km off the Miaoli County coast has been completed and commercial operations would start by the end of this year after operating on a trial basis.

Twenty-two wind turbines have been installed for the Formosa 1 project. The first two, completed in phase 1 in October 2016, have a total capacity of 8 megawatts (MW).

Phase 2, which started at the end of May, but was hindered by severe weather, would add another 120 MW, Tsai said.

The completion of phase 2 is a milestone for Swancor, which entered offshore wind power development in Taiwan in 2015, he said.

Formosa 1 is owned by Danish energy developer Orsted, with a 35 percent stake; Japan-based power producer JERA Co, with a 32.5 percent stake; Macquarie Capital of Australia, with a 25 percent stake; and Taiwan’s Swancor, which owns 7 percent, the project’s Web site says.

Orsted this year received permission to develop offshore wind power in Taiwan, as the government is pushing efforts to add renewable energy sources and build an eco-friendly environment.

Orsted last month said it was planning to issue New Taiwan dollar-denominated green bonds on the local market by the end of the year to raise money for its renewable energy development here.