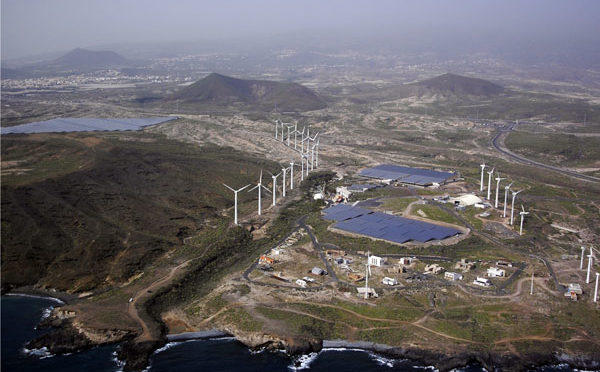 In recent weeks, there has been a phenomenon that speaks of the growth of wind power in the Canary Islands, with a production in hours of low demand that has had to be limited, although only in part, and that are called “Surpluses of generation that cannot be integrated into the system ”, according to the order that is sent to the control of each wind farm from the REE control center.

“Thus a priori, we could interpret these circumstances as a nonsense. However, it is good news and they constitute a challenge that we must face and plan, ”explains Rafael Martell, president of the Wind Energy Association of the Canary Islands (Aeolican), which adds that the wind turbines has been providing clean energy to the Canary Islands“ since the 1990s , but never contributed as much as now, it was never necessary to limit wind turbines. ”

The implementation of new wind farms in the Canary Islands in recent years has been a success and, thanks to that success, although it seems a contradiction, the wind, with its advantages and disadvantages has taken the system to the limit and has put the operation of the electrical system in the Islands “legs up”, he emphasizes. These situations last a few hours, not all wind turbines are stopped / limited but only a part until the wind generation is reduced to a power that can be assumed by the electrical system. This only happens on windy nights (usually it is more windy in the day than at night) and coincides with days of low electricity demand, such as the early hours of Sunday to Monday, for example.

The virtues and lacks of each generation source have been evidenced, and especially the limits of small and isolated electrical systems. Wind energy produces a lot of clean and cheap energy, but unstable by relying on wind and unable to follow demand. The thermal groups provide security and demand monitoring, but wind power leads them to operate outside their optimum working range and the costs are high, economic and environmental. “To put it in colloquial language, the thermal groups have always followed the demand, but now they must follow the demand and follow the wind at the same time, and, sometimes, those follow-ups are divergent and, simply, the fossil groups were not designed for that level of operational stress, ”explains Martell.

The business leader suggests that more wind turbines should continue to be installed in the short term, as expected after the publication by the IDAE (Institute for Diversification and Energy Saving) of the final resolution of the winners of the first wind auction in the Canary Islands. With more wind, “of course, the stops / limitations to wind farms and the wasted night wind will increase, but this wind ‘waste’ will be mitigated in part by the introduction of electric mobility, since in many circumstances electric vehicles will be recharged at night, when they are not used and taking advantage of the specific nightly rates where recharging will be cheaper. ”

In this way, Martell proposes a review of the REE operating procedures in the Canary Islands, “not because they are not optimal, but because they were approved a few years ago and the circumstances and technology have changed since then”. And regardless of the results, above all, “because of all the actions to be taken to mitigate the limitations of wind turbines, this is relatively cheap, safe and fast, since we are talking about computer models where to test different limit situations.”

In the long term, he believes that “there is no other choice but to consider large, expensive, committed and complicated investments,” but they will be the only way to advance the penetration of renewables. “Here it fits everything, replace fossil groups with new, more flexible ones, pumping (Chira Soria is published and in allegations phase), batteries of all kinds, interconnections and smartgrids, capacitors even other technologies still in the R&D phase”. All these options have “advantages and disadvantages” over others, there is no single solution and, surely, several of these alternatives have been implemented, properly combined. And, as always in electrical systems, “there is the key, the right combination of different generation technologies and different network integration technologies. But the right combination of cost and timing is also necessary, and this requires good planning, comparative studies and, above all, political commitment, ”he says.