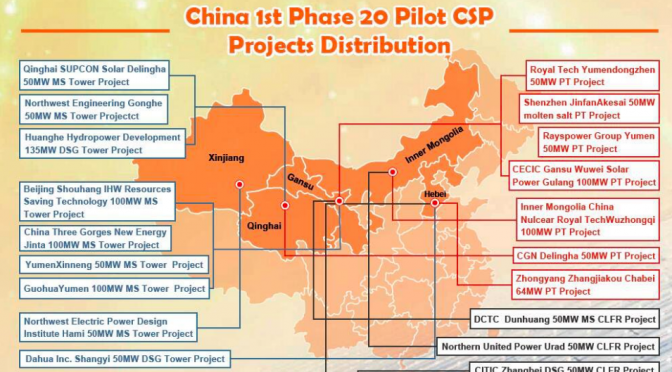 A group of large-scale commercial solar thermal power (CSP) plants have been developed and constructed in China since the official announcement of national first batch of 20 demonstration projects and FiT policy accordingly.

The Chart below lists the projects:

See the project details in the following wrapped up by CSP Focus:

Earlier this September, the project has been approved by the State Grid in Qinghai Province and now ready for grid connection.

As planned, the 50MW Luneng Haixi CSP Project will be officially operational on September 20th in ten days.

At that time, Luneng Haixi project will be the first large-scale commercial solar thermal power plant which is not amongst China 1st batch of CSP demonstration projects, and the 4th CSP plant in China.

As one of China first batch of demonstration CSP projects, the project is under great progress and supposed to be commissioned very soon and operational by the end of 2019.

With the total investment of RMB 1.222 billion, and 6 hours’ molten salt thermal electricity storage, the project expects an annual electricity generation of around 156.92GWh after completion.

Thanks to the strong support and commitment from the owner Power China, and the experience and expertise of SUPCON solar (Solar Field EPC Contractor), the project is able to be developed and constructed quite smoothly.
Predictably, it would be China fourth CSP demonstration project.

Amongst China first batch of demonstration CSP projects, the project was officially started in 2017 in Dunhuang CSP Industrial Park.

The project takes innovative Fresnel CSP technology which is owned by the developer Lanzhou Dacheng Company, and molten salt will act as the role of both heat transfer and storage fluid.

It is expected that a new molten salt Fresnel CSP station will be built up in West China by the end of this year.

The project is the largest parabolic trough plant amongst China 1st batch of CSP demonstration projects, and the only remaining demo located in Inner Mongolia province.

With the total investment of around RMB 2.9 billion, the 100MW parabolic trough CSP project is equipped with 375 PT loops and 10 hours’ molten salt thermal energy storage system. The annual electricity generation is expected to be 350GWh.

Enlisted in China CSP demonstration projects, the project has been progressed well and is expected to be completed by the end of 2019.

As the only CSP pilot project in China Xinjiang Province, CPECC Hami CSP project is located in the highest latitude – 43°North.

Selected as one of China 1st batch of CSP demonstration projects in September 2016, the project has been under continuous development and construction since the break-ground on June 8th, 2017.

It is expected that No.1-3 Modules will be completed and connected to the grid at the end of 2019.

It is the only pilot project taking innovative beam down CSP tower technology and also will be the first large-scale commercial CSP project in the world taking beam-down CSP tower route.

With total investment of RMB 1.79 billion, the project is made of 15 mirror field Modules, and each module consists of 17MWth solar filed and one beam-down tower, totaling 50MWe. One 9-hour molten salt thermal storage system & steam turbine set are also equipped in the project.