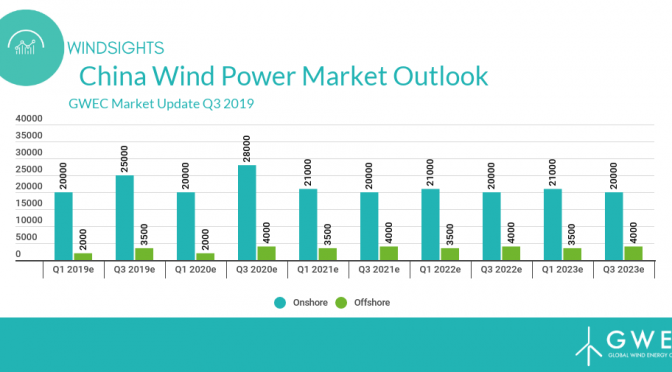 China is the world’s largest wind power market in both new and cumulative installations. In 2018, the country installed 20.2 GW of onshore wind energy and 1.6 GW of offshore wind farm, representing 44% and 37% of global market share respectively.

The continued growth of this wind turbines market is mainly due to ambitious policies at the national level which has made wind and other renewables extremely cost-competitive. On 21 May 2019, the Chinese National Development and Reform Commission (NDRC) released a new policy presenting a clear roadmap towards the subsidy-free onshore wind energy.

This regulation means that projects already approved until 2018 will continue to receive the Feed-in-Tariff (FiT) if they are  grid-connected before the end of 2020, whereas projects approved this year (2019) and next year (2020) will enjoy the 2019 FiT and 2020 FiT respectively if they are connected to grid by the end of 2021.  Starting from 1 January 2021, all newly approved onshore wind projects shall reach the grid parity (zero- subsidy).

This shift away from a FiT demonstrates that onshore wind is becoming increasingly competitive in the energy market. This is mainly due to the improvement and innovation of onshore wind technology and, in turn, a fall in kWh costs. With 224 wind and solar non-subsidized projects amounting to a total of 20.8GW already approved, the subsidy-free era in China is becoming a reality quicker than anyone could have expected.

NDRC’s latest notice on on-grid onshore and offshore feed-in-tariff (dated on 21 May, 2019)

As estimated at the time of the National Energy Administration’s (NEA) new policy release, there are more than 60 GW onshore wind projects approved before the end of 2018 which are not yet installed. To capitalise on the previous approved FiT, Chinese utilities and IPPs only have one year and a half time window to get those projects connected. Therefore, GWEC Market Intelligence believes that an installation rush is likely to take place in 2019 and 2020, similar to what happened in 2015. This rush might bring the new onshore installation in China to 25GW in 2019 and 28 GW in 2020. In fact, the H1 2019 installation figure, 9GW, released by NEA on 25 July already indicated a 12.5% and 50% growth compared with H1 2018 and H1 2017 respectively.

After 2020, new installations of onshore wind in China are expected to decline to the level of 20 GW, primarily due to the NEA having the newly approved centralised wind projects under control. According to the Notice on 2019 Wind Project Construction Plan released by NEA on 28 May, the provinces expected to surpass their 2020 wind power installation targets can only approve the subsidy-free onshore projects.

As of June 2019, China has more than 10GW of offshore wind farm projects under construction with another 40 GW already approved and ready to be built. Similar to onshore wind, an installation rush is also expected for offshore wind in China up until 2020. Local offshore project developers have confirmed at GWEC’s Global Offshore Wind Summit – China in June that they will try as much as they can to capitalise the 0.85RMB/kWh FiT. However, concerns regarding the supply chain have also been expressed by large Chinese offshore wind turbine suppliers. Currently, the manufacturing of key components such as large blades, main bearings, and offshore cables are becoming the bottlenecks that might limit the potential volume of offshore wind to be grid-connected between now and 2020.

Altogether, there is no denying that China continues to be on track to lead the transition from traditional energy sources such as coal, to wind and other renewables – and they are proving now that this transition can now be subsidy-free!

The report is exclusively available for GWEC members and as part of GWEC’s new Market Intelligence platform. The final report includes more than 30 tables and figures charting the market outlook for the South East Asia region up until 2030. This report is the first edition of Market Updates of GWEC Market Intelligence, with the next Market Update to be released in fall shifting focus to Latin America.