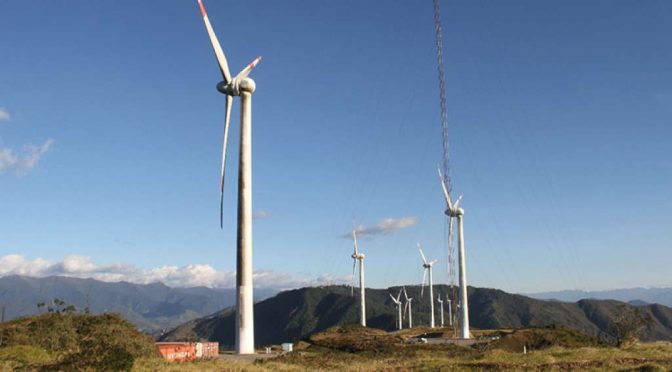 The Government will deliver concession contracts to private companies to build the photovoltaic plant in El Aromo and stages II and III of Villonaco.
Ecuador calls private investors for the construction of electrical projects with non-conventional renewable energy such as solar and wind energy (obtained from the wind). On July 30, 2019, the promotion stage of the photovoltaic plant in El Aromo and the Villonaco II and III wind farm began. Both require an investment of $ 400 million. Villonaco wind turbines are from Goldwind.

The Minister of Energy and Non-Renewable Resources, Carlos Pérez, said that these projects will compensate for energy production during the dry season. With the production of El Aromo, 60.8% of Manta’s energy consumption or 22% of Manabí will be covered. In addition, around 128,000 tons of CO2 per year would be reduced and the consumption of 7’934,580 gallons of fuel oil per year would be avoided, due to the impersonation of photovoltaic thermal generation. Additionally, the project will allow an approximate saving of $ 9 million per year for the elimination of generation with fuels. The electrical production of Villonaco II and III means a reduction of 219,870 tons of CO2 per year. On August 28, 2019, the public tender will be officially called for companies to make their technical and economic offers within 40 days. “The company that offers the lowest kW / h rate will win,” said Enith Carrión, representative of the Electric Corporation of Ecuador. The Paute Cardenillo Hydroelectric Project in Morona Santiago will also be presented in the coming weeks. The project has definitive designs for 2013. It will have an installed capacity of 595.65 megawatts. Investment and work For Elesban Jaramillo, president of the College of Electrical and Electronic Engineers of Loja, the granting of these projects to the private sector is positive as long as the State does not have the capital to do the work. “The important thing is that they do not stop being done,” he adds, “especially when they are a source of work.” The specialist believes that the company that wins the tender must include in its technical workforce between 60% or 70% of Ecuadorian workers and “avoid the same thing happening with other companies in which foreign labor was prioritized”. Recommends a review in the time in which the State will return the investment to the private sector, as well as the value that the energy will have for the users. “If we are already taking advantage of the natural resources that we have, the logical thing would be that it is advantageous for everyone, especially in the sales value for the user through distribution.” Modernization and impact Eduardo Rosero, president of the Association of Renewable Energies and Energy Efficiency, says that the concession to the private sector proposes a change of model and vision in the national energy business. “The statist model comes to be replaced by efficient private generation and above all excludes the possible corruption of overpriced works,” he adds. The expert points out that these works achieve a diversification of the electricity generation matrix, reducing the vulnerability of the system. “While it is true that the power generation matrix borders 80% in hydroelectricity, this diversification reduces the risk of any climatic phenomenon that could occur in the watersheds of the Amazon that are essential for the system.” Rosero says that the implementation of these works responds to an “agile” process, taking into account the conditions and logistics. “They could quietly be ready in one to two years. However, the financial closing could take the same time depending on the existing guarantees. ” Once these works are completed, they will be incorporated into the National Interconnected System (SNI) and energy can be consumed nationally by the industrial, commercial and residential sectors, “thus improving its quality and optimizing the transmission and distribution infrastructure.” “These works undoubtedly represent an advance for the country in energy matters and will prevent us from returning to the past when we bought energy from Colombia and the famous barges with diesel were used,” concludes Jaramillo.