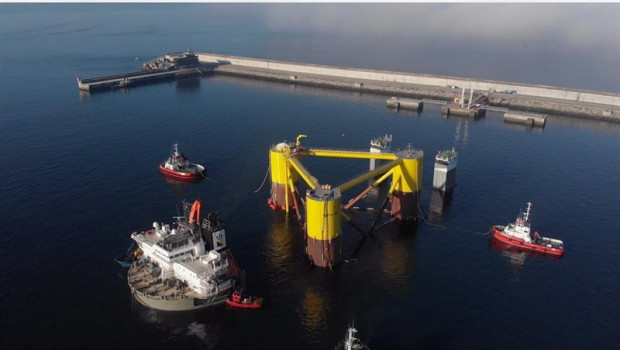 The Windfloat Atlantic floating wind wind power project, participated by Repsol, EDP Renováveis, Engie and Principle Power, will take an important step in its development with the start on Wednesday of the installation of its first wind turbine in the outer port of Ferrol.

In a statement, the consortium notes that this advance represents a “key milestone” for the wind farm and for the offshore wind energy sector, “given that such a large turbine had never been installed on a floating platform”.

The tasks of manufacturing and transfer of cargo within the framework of this first WindFloat project were successfully carried out last week in Fene, and the platform has been anchored in the dock of the port of Ferrol, where the installation of the turbine will start wind.

Thus, the assembly will take place during the next few weeks in order to prepare the operations that will be carried out at sea and that are planned for the end of summer, when the floating structure will depart to its final destination on the coast of Viana do Castelo (Portugal ).

This floating offshore wind project belongs to the Windplus consortium, whose main shareholder is EDP Renováveis, with a 54.4% share, followed by France’s Engie (25%), while Repsol owns 19.4% and Principle Power the 1.2% remaining.

The three wind turbines that make up the wind farm will be mounted on floating platforms anchored to the seabed and will provide the complex with a total installed capacity of 25 megawatts (MW), the equivalent of the energy consumed by 60,000 homes for a year.

The wind farm, which will be located 20 kilometers from the coast of Viana do Castelo and with a depth of 100 meters, is being developed with the leading engineering of Principle Power, which allows the installation of floating platforms in deep waters – inaccessible to the date-, where you can take advantage of abundant wind resources.

The project has had the support of public and private institutions, which has led to the investment of leading companies in their markets and the support, through funding, of the European Commission (through the NER3000 program), the Government of Portugal and the European Investment Bank.

In addition, among the suppliers, together with Principle Power, the joint venture ‘Navantia / Windar, the group A. Silva Matos, Bourbon, the turbine manufacturer MHI Vestas and JDR Cables stand out.