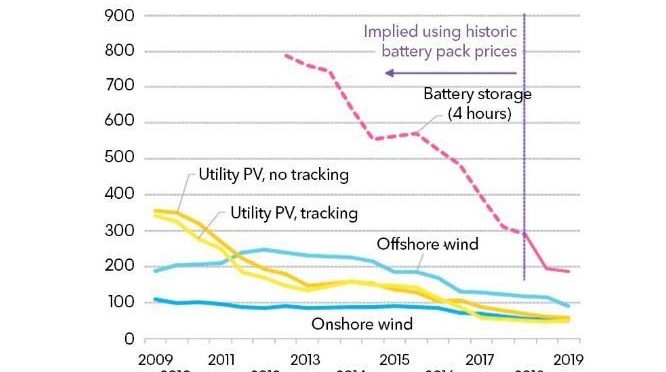 In many parts of the world, renewables represent the least cost source of new power generation technology. The global weighted average levelised cost of electricity (LCOE) from all commercially available renewable power generation technologies declined in 2018, including concentrated solar thermal power (CSP) (down 26% from 2017), bioelectricity (down 14%), solar PV and onshore wind energy  (both down 13%), hydropower (down 11%), and geothermal and offshore wind power (both down 1%).

The decline is due in part to technology improvements and to reductions in installed costs, but also to
increasing market competition. For example, major suppliers of wind turbines and associated technology for hydropower plants noted strong and increasing competition in the global marketplace, contracting sales, and declining or even negative margins.
Because the LCOE of different technologies can vary greatly by country and region, the global weighted average LCOE is an imperfect measure; however, trends in this metric give a sense of overall movement.

In 2018, the global weighted average LCOEs for hydropower (USD 47/MWh), onshore wind energy (USD 56/MWh) and bioelectricity (USD 62/MWh) were all at the lower end of the LCOE range for fossil fuel generation technologies (at USD 49/MWh to USD 174/MWh). These renewable technologies were able to compete head-to-head with fossilfuels, while geothermal projects (at USD 72/MWh) were not far behind.

Wind turbine prices fell by between 10% and 20% from 2017, depending on their size and market, helping to reduce installed costs for wind farm projects around the world.
A significant number of onshore wind power projects were commissioned in 2018 with an LCOE of between USD 30/MWh and USD 40/MWh, much lower than the cost of new fossil fuel power plants and even rivalling the variable costs of fossil fuels in some regions.

The global weighted average LCOE of offshore wind power declined 20% between 2010 and 2018, from USD 159/MWh to USD 127/MWh, and declined 1% in 2018 from the 2017 value. These reductions have been influenced by improvements in wind turbines technology that drive higher wind
capacity factors and reduce operations and maintenance costs, even as projects were increasingly developed in deeper waters and farther from ports.
Solar photovoltaic has experienced the most rapid cost declines, as module prices have fallen more than 90% since 2010. In 2018, crystalline silicon module prices fell by between 26% and 32% from 2017 levels due to competition, continued improvements in module efficiency, as well as manufacturing improvements that have reduced process costs and raw materials needs.