In the vicinity of route 88 on jurisdiction of the town of Mechongué, the Chinese company Goldwind installs wind turbines of the first of the two wind power farms with which General Alvarado will become the district that generates more electric power in the country. 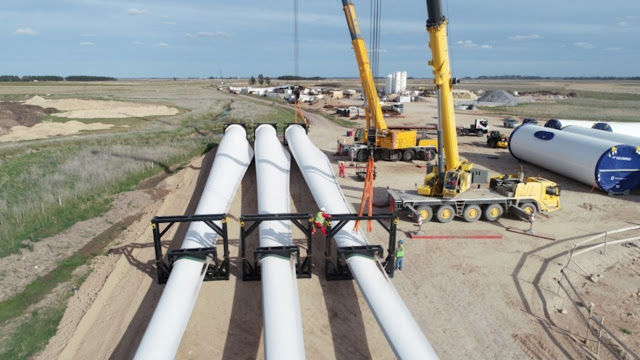 In General Alvarado, there are literally winds of change. Based on the well-known benefits of wind energy, the municipal authorities decided to promote investments in the sector and aimed to turn the district into the area with the highest electricity emission in the country based on the technology of the air turbines. .

Although the pharaonic work became very visible in the last weeks from the cuts to the transit on route 88 – necessary to carry out the transfer of the components that will give operation to the place from the port of Quequén-; the works began in the last months of 2018, the first of them, in charge of the company of Chinese origin Goldwind.

In dialogue with 0223, the Secretary of Production of the commune, Sebastián Ianantuony, confirmed that the works carried out by these days the Asian firm are part of the first of the two wind farms with which the district will have by 2020.

The Goldwind project is carried out on the grounds of the La Rosa Blanca ranch, a 538 hectare property located on kilometer 46 of Route 88, belonging to the jurisdiction of Mechongué. Ianantuony, native of that locality, clarified that the park denominates “Winds of Miramar” by definition of the company, like representation of the name of the city more known of the party.

The projects began to take shape in 2016, when General Alvarado joined the Renewable Energy Plan in Argentina (RenovAR) and managed the batch of at least 500 hectares that took the company Goldwind, manufacturer number 1 in his country and No. 2 in all the world. “In this first park, we expect to generate about 100 MW. through the placement of 29 turbines at 90 meters, “explained the Production Secretary.

In that line, Ianantuony described that “during the civil work, which extends between 12 and 18 months, the works demand an average of 150 permanent people. When the part of the assembly is done, some 300 will be needed. Once finished, the place is managed with only five human resources, “he specified.

From the municipality sought to be clear about the direct benefits that this investment will generate in the population, focusing on the future amounts of the rates. “When these two parks are in operation at the end of 2020, we will become the highest emitting district of energy in Argentina, but it will be the big consumers who will be able to ask to have their contracted power. The commitment is aimed at this generation turning to the national interconnected market that manages Cammesa, who buys Edea energy, “explains Ianantuony.

“Answering if we are going to pay less electricity is not so simple. With these projects it will be possible to reduce what today is paid for energy from hydrocarbons, which according to questions of its peak consumption has a cost of between 75 and 93 dollars a mega. This company tendered at $ 50. That is to say that it is going to be able to offer to the wholesaler an energy to a much lower value of the conventional “, recognizes the secretary.