Ground has been broken on the development of West Africa‘s “first utility-scale wind power project”, located in Senegal.

The 158.7 megawatt (MW) Parc Eolien Taiba N‘Diaye, or PETN, is set to be completed in 2020, according to renewable energy firm Lekela.

The 46-turbine facility will use turbines from Danish company Vestas and will generate more than 450,000 megawatt hours of energy annually, boosting Senegal‘s generation capacity by approximately 15 percent, Lakela said. The project will be built near the community of Taiba N‘Diaye. 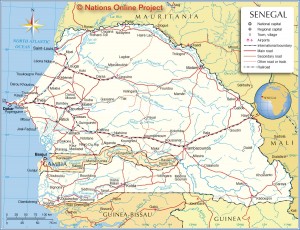 “Senegal has been quick to embrace the idea and the advantages of renewable energy,” Chris Antonopoulos, Lekela‘s CEO, said in a statement towards the end of last week.

The International Renewable Energy Agency has described Africa as being rich in renewable sources of energy such as the wind and sun.

Kenya, for example, is home to the Lake Turkana Wind Power project, which is made up of 365 wind turbines. The project has a total installed capacity of 310 MW and has been producing and sending electricity to Kenya‘s national grid since September.