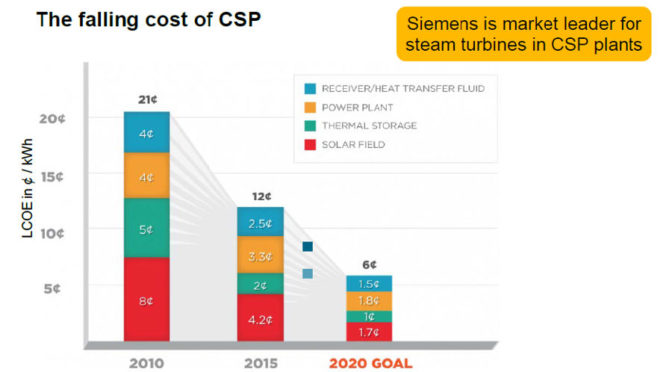 Concentrated Solar Power (CSP) plants initially won their place on the market thanks to government subsidies. Current trends reveal, however, that development efforts have meanwhile pushed this technology in combination with photovoltaic (PV) installations to competitive parity with fossil power generation. 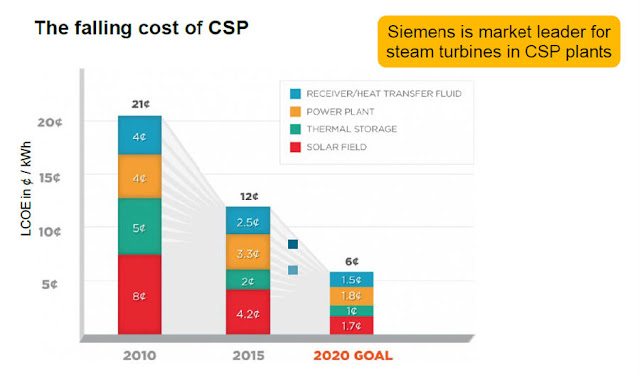 The term “sector coupling” can denote the combining of fossil fuels with renewable energy sources, and any number of CSP projects have been erected that combine solar energy with fossil fuels. The power plants Kuraymat in Egypt and Hassi R’Mel in Algeria are two noteworthy examples. At both of these facilities, a solar field is coupled with a combined-cycled power plant that uses the solar energy collected during daylight hours to provide the boiler with “supplementary firing” capacity.

Besides this coupled configuration to produce power more efficiently at lower prices, the more than 70 CSP generating installations erected between 2005 and 2012 under various subsidizing programs are having diverse, mutually positive and highly promising impacts:

Thanks to this large number of CSP projects, the power plant builders (engineering, procurement and construction (EPC) companies) and component suppliers have successfully worked their way through a learning curve, thereby reducing costs for planning, erection and per component (such as mirror fields and solar fields, boilers and turbine-generator sets, etc.).

The scaling of CSP plants for electrical generating capacities of up to 200 MW, such as Noor 2 in Morocco, in conjunction with cost-cutting and reasonable financing has had a significant impact on the dramatically falling levelized cost of energy (LCOE) used as a basic approach for planning new projects. While Spain saw estimated costs ranging from 25 to 30 EUR cents per kilowatt-hour (kWh), the current rate for projects today is 7 EUR cents per kWh.

Despite this trend, the view long held in the years from 2012 to 2016 was that competition between photovoltaics (PV) and CSP would ultimately be won by PV due to the enormous rates of PV expansion and the resultant reductions in cost this would bring. This view was also based on the assumption that the problem of energy storage capacity would be solved by batteries. Yet, as previously noted, it’s plainly evident today that these circumstances have not yet come to pass. The debate furthermore failed to consider that PV brings no rotating machinery serving grid stability – an added benefit that the steam turbine-generator sets of CSP plants do indeed contribute.

oday, a rather different trend is becoming apparent in current projects: The benefits of both CSP and PV are being combined in hybrid power plants.

Seen in this light, the growth rates forecast for CSP installations by various energy agencies around the globe appear realistic. 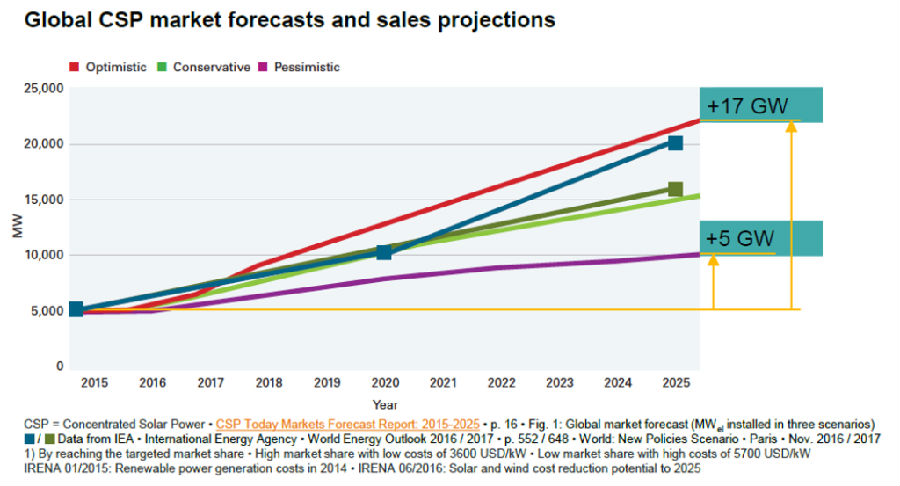 The Chinese CSP program established in 2016 and launched in a first wave of 20 power plants designed to generate 1.3 GW of electric power all told will most certainly help contribute to cutting costs even more while also further improving this technology. Yet, of these 20 new CSP installations, it must be noted that to date roughly half of it have succeeded in reporting significant progress in this regard. The successful approach applied in other countries of incentivizing projects by guaranteeing certain feed-in tariffs has not worked well for every project in China. It can be assumed that follow-up adjustments will have to be made for the next waves of CSP installations there.

Scratch the treshold of 1 GW

Since 2016, there has once again been growing activity in the CSP sector in addition to these projects in China. Current highlights include the Noor Energy 1 project in Dubai, formerly called Rashid al-Maktoum as well as ACWA DEWA IV, which is designed to deliver over 700 MW of electricity. Hence, 2018 had good prospects of once again scratching the threshold of 1 GW of newly installed CSP generating capacity for the first time since 2011.

In contrast to the years from 2005 to 2012, this most recent growth is attributable to the economic competitiveness finally achieved by CSP plants in terms of LCOE erected in combination with PV capacity, and their emissions-free operation, and not to any boom artificially created by term-limited state subsidization.

I therefore expect that further vast potential created by efforts to optimize the additional 150- to 250-MW power plants now in planning will lead to further cost reductions. These advancements will come in the following areas:

Optimizing the modes of operation of overall plants

Optimizing the water-steamcycle in conjunction with the boiler, preheating train, steam turbine-generatorset and condenser

All in all, it’s clearly evident that CSP has become firmly established as a component of the energy turnaround in sunny regions of the world, and will remain so in future.

These projects have led to an optimization of systems and installations that takes into account the interplay of components, the design of the water-steam cycle, the size of installations and the electrical output to be fed to the grid.

The use of solar energy to generate electric power is by no means an invention: a solar-thermal power plant had been built in Egypt as early as 1912, and a larger number of CSP plants were erected in the United States back in the 1970s and 80s. These installations all proved that it’s fundamentally possible to generate electricity from solar power, and that such systems function reliably. Yet, two key factors in that era still impeded widespread acceptance of solar-thermal power generation: the lack of means at that time for storing energy, and the excessively high generating costs of CSP compared to fossil fuel power plants. Consequently, CSP plants remained a niche application for the time being.

As awareness grew over time – particularly among the world’s industrialized nations – that our fossil fuel reserves are not infinite and that combustion of fossil fuels is one of the main causes of climate change, the post-millennial years saw renewed initiatives to advance the development of CSP technologies. In particular Spain and the United States seized the reins as pioneers driving these new efforts. Motivated by state-backed subsidization programs that ensured CSP plant operators adequate grid feed-in tariffs, over 70 concentrated solar-thermal power plant projects were built between 2005 and 2012, delivering a total electrical generating capacity exceeding 4 gigawatts (GW). Spain stands out especially, with more than 40 installed CSP plants generating over 2 GW in total. Various general conditions are typically specified for such incentivizing programs. In Spain, for example, the electrical generating capacity per power plant was limited to a net grid feed-in volume of 50 megawatts (MW). Most of these installations were based on parabolic-trough technology, in which thermal oil is used as a heat-transfer fluid, heated to high temperatures as it is routed through a tube running along the focal line of parabolic mirrors. This heat is then used to generate steam in a heat exchanger, which in turn drives a downstream steam turbine-generator set to produce electric power. While the properties of this thermal oil initially limited the resultant main steam temperatures to less than 400°C, new heat-transfer oils have meanwhile been developed that enable main steam temperatures of up to 435°C. Almost all CSP plants are also designed with a reheat system to increase the efficiency of the water-steam cycle even further.

Inclusion of reheat system, and plant startup and shutdown daily.

Siemens succeeded in offering the most convincing solution for these needs with its dual-casing steam turbine in which the high-pressure turbine is designed as high-speed geared unit. All told, 37 of the 47 Spanish CSP plants have been outfitted with a Siemens turbine-generator set.

Central solar tower technology offers two important advantages: Not only can higher main steam conditions be achieved, currently up to 180 bar at 565°C, which significantly increases the efficiency of the water-steam cycle, but the heated salt can also be stored in tanks for periods of up to several hours. This creates for the first time a means of economically storing large quantities of solar energy in a useful, reproducible form, and of feeding that energy as electricity to the power grid as demand dictates. While thermal storage by means of molten salt requires inclusion of additional equipment, it offers decisive, noteworthy advantages over energy storage in batteries – such as the current capacity of 110 MW for 1,100 MWh of power, and the planned 200 MW for 2,000 MWh, each with 10 hours storage time. Equipping and operating this thermal energy storage system is far more economical than storing electricity in batteries, and the system service life is longer by many times over.

Parabolic-trough solar power plants have also been fitted with molten-salt energy storage systems, some even before central power towers were ever constructed.

Owing to the higher theoretical efficiency of solar power towers, the idea prevailed for a time that PT projects would eventually be replaced with tower configurations. This assumption neglected to consider, however, that local conditions can differ. In regions with high dust particle concentrations due e.g. to sand storms, experience has shown that the large distance between the reflectors and receiver, such as in central tower units, poses disadvantages. In such settings, PT installations prove more economical despite the disadvantage of the lower main steam temperature. In areas where pristinely clear atmospheric conditions prevail, tower installations can be used to their full advantage. Both technologies will therefore remain important options.