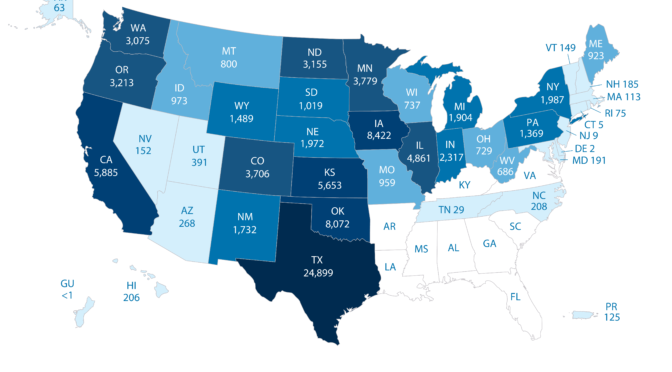 Here are some of the top takeaways from this quarter’s report:

The U.S. wind industry had its third strongest quarter on record

American workers installed 5,944 MW of new wind capacity during the fourth quarter, enough to power all of the homes in Colorado. A total of 47 new wind projects across 17 states came online during the last three months of 2018, and overall, developers added 7,588 MW of new wind last year. That’s up 8 percent from 2017. There are now 96,488 MW of wind power installed across 41 states, enough to power 30 million American homes.

As usual, Texas led in installations for the year with 2,359 MW, followed by Iowa, Colorado, Oklahoma, and Nebraska. Texas continues to lead the nation with nearly 25 gigawatts (GW) of total installed wind capacity and would now be ranked fifth in the world if it were a country.

Meanwhile, Iowa reclaimed second place for installed wind capacity from Oklahoma during the fourth quarter, which had snagged the spot in 2017. Oklahoma now sits in third, followed by California and Kansas. South Dakota also became the latest member of the “Gigawatt Club,” or states with more than 1,000 MW of installed wind capacity. It’s the 19th state to do so.

Corporate demand for wind energy has never been higher

Corporate and non-utility wind power purchases spiked to a record level in 2018, signing contracts for a total of 4,203 MW. That’s 66 percent higher than the previous record in 2015.

In total, 37 non-utility buyers signed wind energy contracts in 2018, including 21 companies that purchased wind energy for the first time. AT&T signed contracts for 820 MW of wind energy, more than any other company in 2018. Walmart came in second with 533 MW, followed by Facebook, ExxonMobil, and Shell Energy North America. In total, 14 companies signed up for over 100 MW.

To date, corporate and other non-utility customers have signed PPAs for more than 11,300 MW of wind energy – more than all the wind online in number two wind state Iowa.

Combined utility and non-utility purchases of wind power also reached the highest level on record, with 8,507 MW of PPAs signed in 2018. Corporate and other non-utility customers represented 49 percent of total capacity contracted, while utilities accounted for 51 percent.

There were over 35,000 MW of wind projects under construction or in advanced development at the end of 2018, a 22 percent year-over-year increase. That’s more than all the wind in Texas and Iowa combined, the country’s two leading wind states. This activity spans 176 projects across 31 states, with 12 states on track to grow their installed capacity by at least half.

The fourth quarter capped off an active year for the U.S. offshore wind industry

Elsewhere, the Connecticut PUC approved Ørsted US Offshore Wind’s PPA with Eversource Energy and United Illuminating Co for 200 MW of the Revolution Wind project. Connecticut also selected an additional 100 MW of Revolution Wind as a winner of its zero carbon RFP.

Finally, a major highlight came in December when BOEM held a highly anticipated auction for three offshore wind lease areas off the coast of Massachusetts. After 32 rounds of bidding, the leases were awarded to Equinor, Mayflower Wind Energy, and Vineyard Wind for a total of $405.1 million. Each lease reached $135 million, far surpassing the previous lease record of $42.5 million.

Be sure to check out the full report for additional details. A public version is available here. You can see more state level facts from the fourth quarter in AWEA’s state fact sheets, as well as a map of all online wind projects and wind-related manufacturing facilities in the U.S. on our website.